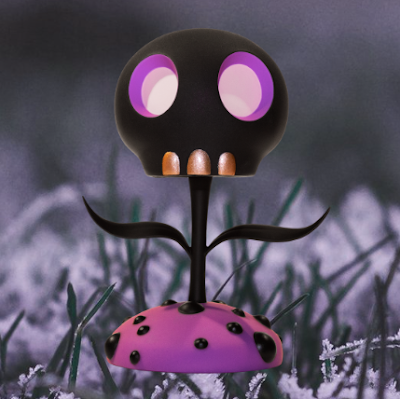 As the cold, depressing grip of late fall/early winter chokes out the sunlight on New Jersey, I am trying to remember all of the success my wife and I had with our gardening efforts this year.  She enjoyed a bountiful harvest of peppers, though our attempts at growing eggplant produced nothing but no edible runts. All of the blueberries were consumed by the chipmunk that lives under our porch which I don't really mind because I'd like to think he looks forward to them every year.  Flower-wise we were smarter this year, as we only planted things that could tolerate a healthy amount of neglect and that would attract butterflies and hummingbirds for the cats to watch.  Right now the only color outside of our house comes from the uncarved pumpkins that are well past their expiration date and that I'm scared to pick up lest they explode in my hands and cover me in their gore.  I can see it now as I go to toss them into the woods and their already soft rinds give way, ruining a perfectly good pair of shoes.  Whatever happened to juvenile delinquents stealing them to throw them at houses they didn't like?  Please, come and take them!

This Skull Flower from Tara McPherson perfectly illustrates the grave yard that is my flower bed this time of year.  Death thrives in the damp mud left behind from melted snow fall and the only thing that will grow is the shortening of daylight.  Alas, before I start reciting The Raven, let me tell you that this exclusive Mighty Jaxx version of this figure will be released on Saturday, December 14th at 9am eastern time for $55 (which includes world wide shipping).  You can snag one for yourself by visiting https://mightyjaxx.rocks.