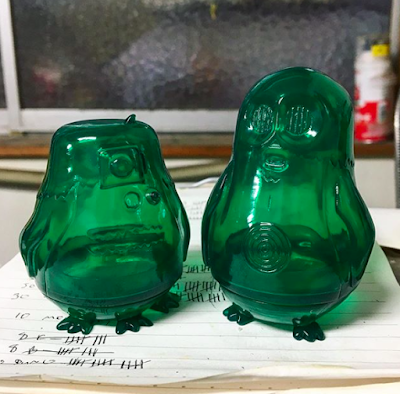 I have yet to watch The Mandalorian for a few reasons, but mostly because I have been spoiled by the age of binge watching and was waiting for the first season to end.  I had also committed to the final season of The Man in the High Castle (whose last episode I would have preferred to have ended about two minutes sooner) and Mrs. Maisel, which serves as my palette cleanser between serious programming.  After that ends I will then dive deep with my borrowed Disney + account info and revel in the exploits of Baby Yoda.

Speaking of which, I'm gonna go out on a limb and say that little green dude is the inspiration for Nathan Hamill's latest series of Drorgs figures.  They're a mashup between everyone's favorite robot duo and those little puff balls that had held the title of "cutest things in the Star Wars universe" until Baby Yoda batted those big black eyes and made you forget everything you thought you knew.  Science Patrol (who handled all of the production on these figures) will be offering these as an open edition, which means that starting on Friday, December 13th and lasting until January 13th, you can place your order at http://sciencepatrol.storenvy.com and be guaranteed a set.