Did you make it out to the inaugural Five Points Festival? If you did, then you know it was the convention that the East Coast has been begging for.  If you didn't make it, I'm sure you were glued to your social media checking out all the excitement and planning how to make your way there next year.  It took the best parts of much larger conventions and parred them down so that nearly every booth appealed to my wallet.  Ok, I'm not really into comics, but the designer toys were so plentiful I had more than enough to look at and drool over.

Usually when I attend a convention I have one or two things I really want on my list, then I inevitably find a few more as a bonus.  Not here though, as everywhere I turned I was literally bombarded with figures I'd never been able to see in person and desperately wanted.  Tons of artists that rarely exhibit in America let alone the east coast had tables full of toys that made me wonder how long I could go without paying my mortgage before it became a problem.  The Sunguts booth alone could have sent me to bankruptcy court. 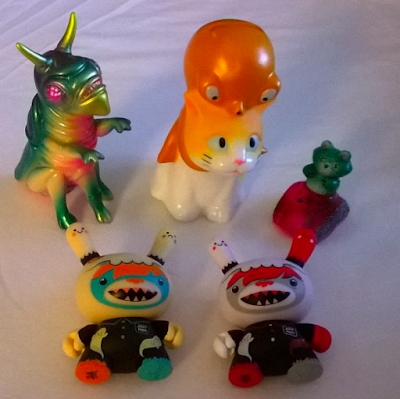 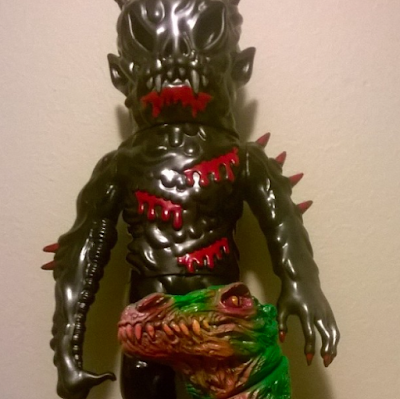 There was also a line of food trucks and a beer garden outside.  The beer I passed on but let me tell you about Phil's Steaks, which Sharon and I consumed both days.  Good Lord I would smack your momma to be able to eat from that truck every day, which is strange for me to say because I am so freakishly weird about where I'll eat. I have never once eaten from a food truck because food from a gas station will kill you, so food from a gas guzzling vehicle can't be much different right?  I was so wrong and wonder what else I've been missing out on.  Not that I'm willing to be bold to the level of eating a hot dog from a street cart, but I'm closer than I ever have been to being a culinary adventurer.  My wife is still amazed.

Other highlights from our adventures:

- Meeting tons of artists and collectors that I've known for years online but never met in person until now.  Literally I was standing next to people, heard them mention their names on Instagram, and we started talking as if we'd been life long friends.  That's the beauty of collecting.

- On day two we walked from Battery Park to the venue, which was approximately two miles.  Beneath the Brooklyn Bridge we saw a completely nude man laying face down on a large rock.  Was he sunning those hard to reach areas, was it performance art, or was their an issue involving chemicals?  As weird as it was to see it was weirder how many people passed by him without taking notice, as if it were commonplace.  I never want to be that comfortable, either as the man or the passers by.

- We went to The Statue of Liberty and took a photo holding up one of the exclusive Gary Ham Dunnys from Kidrobot.  A hopeful seagull thought it might be edible and nearly made off with it as my wife's outstretched hand tried to get it into position, which would have been a funny story, but would have also cost me $14.99. 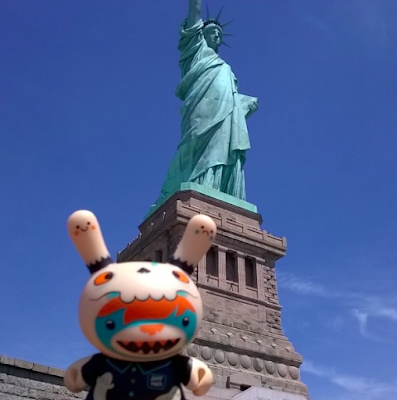 - I actually ate at a food truck and loved it.  Did I mention that yet?

-  I tried to not be a germaphobe for once and didn't ask for hand sanitizer after holding onto the pole in the subway.  A few hours later I used that hand without thinking to remove a hair from my mouth.  Somehow I did not become patent zero for the next great plague.

-Someone dropped a can of chicken noodle soup and a bag of grapes on a different subway trip and a roach the size of a Chihuahua appeared and said "back up hungry eyes" with a perfect New York accent.

- I never once had to stop in the middle of an aisle because someone was taking pictures of a half dressed woman from a comic book.  Cosplay is cool I suppose, but not when it causes me anxiety because I'm trapped in between sweaty people trying to take pictures of it.

All in all I had one of the best convention experiences ever and would like to thank everyone at Clutter Magazine and Five Points Festival for letting me be a part of it.  I'm already saving up for next year.

Check out all of the photos I took over at our Facebook page at www.facebook.com/thetoyviking