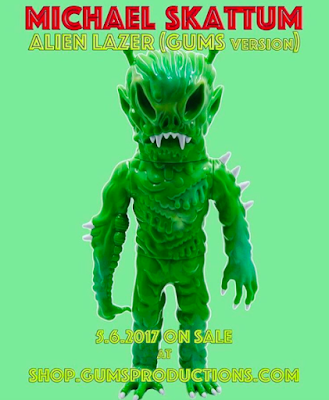 Sharon and I have been marathoning the Alien series of films the past few days and we finished last night with Alien: Resurrection which I wouldn't call a high note in the franchise.  Sure, you might have gotten some of the best looks at the creatures themselves, but there was so much weird dialogue and Sigourney Weaver playing basketball, that it just made it uncomfortable.  You're seriously rooting for the aliens to just decimate all of them and Earth because that's were all the lameness started.  And what was with the weird alien/human hybrid at the end, who I named Skin Tag, becoming the third out of four aliens to die by being sucked into space.  Granted the hole he was pulled through was much smaller and sent him out in bits, but after the basketball scene I was expecting Ripley to put some WWE moves on him to end his day.  Hindsight is 20/20, and Joss Whedon wrote the thing so what do I know.

There's no way that Alien Lazer would take a loss against a rag tag bunch of space idiots.  nope, this figure is the real deal and I know because I bought one from Michael Skattum at Five Points Fest and I love it.  And this thing is way bigger than I expected, because even though something online tells you how tall it is I have no ability to comprehend that in real life terms.  This green version is an exclusive to Gums Productions, who are the folks that produced this monster (and did a great job at that, those seams are tight) and will be available for purchase on June 5th.  You need this and you can get it only from shop.gumsproductions.com.