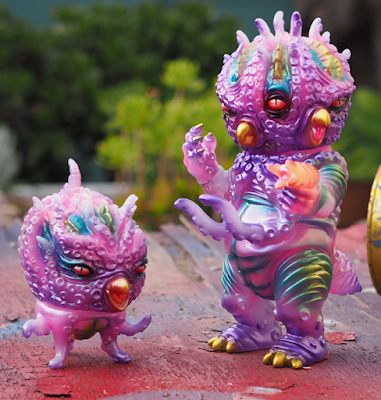 Ok, here's the best case scenario the world can hope for right now:  That idiot from North Korea fires a nuke and it lands in the ocean, mutating sea creatures into massive kaiju, then all the nations of the world band together in some kumbayah moment to vanquish the beasts and save humanity from becoming a great source of protein.  And then America's idiot and all of his cronies fly out to check the damage but one of the monsters wasn't quite dead so it swallows their helicopter whole.  Yeah, maybe I did just write the prequel to Pacific Rim, no big deal.

Paul Kaiju's Hyper Kraken looks primed to attack an island in the Pacific at a moments notice.  This Milky Bloom beauty will be available via lottery this Sunday, June 4th at 6pm pacific time.  You only have a half hour to enter for a chance to buy one so act quickly.  And if you know Guillermo Del Toro, pass along my movie idea.