Of tokidoki and Crane Machines: An American Tale of Success in the Face of Adversity 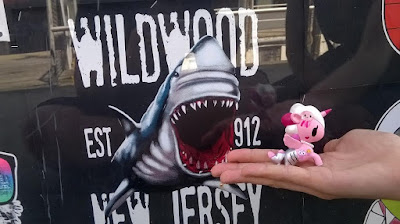 This past weekend the weather was warm and the crane machines were calling me like the quarter stealing sirens they are, so Sharon and I headed down to Wildwood to satiate my arcade lust.  Now I don't consider myself an expert at crane games, but the chest full of prizes I've won for my wife since we've been together would probably say otherwise.  It's filled to capacity with random stuffed toys that I've snatched from plexiglass prisons with the steady hand of a vascular surgeon.  I like to think of myself as a freedom fighter for cheaply made, possibly unlicensed, boardwalk trinkets.

Sharon is excited no matter what I happen to win for her, or at least she is kind enough to feign enthusiasm as I celebrate my show of masculinity.  But this time was different; this time there were objects marooned on a bed of plastic diamonds that I knew she would want:  tokidoki toys!  Yes indeed, one machine was filled with blind boxed toys from her favorite company.  I procured a roll of quarters from the attendant and set about my quest to win every single one.

Spoiler alert:  things didn't go quite as planned.  I spent a few dollars trying to maneuver the crane into just the right position to be able to properly secure each box, but all attempts had failed.  Dejected I moved on, trying my luck at other rigged games of chance in order to salvage what dignity I had left when it came to my hand eye coordination, but at each machine the result was the same.  What was happening to me?  Were my powers stolen by some thief in the night?  When I was a baby my grandmother would freak out when our cat slept in the crib with me because she thought it would steal my breath.  Did something akin to this happen and one of my kitties now possessed a useless talent for carnival games?

My head spun and I felt lost, but unlike a coed on senior week, I was not about to give it up so easily.  I returned to the tokidoki machine and I dug my heels in for a fight.  Determined to play until I was victorious or ran out of quarters, I tried again and again to snatch one of those toys from the gaping chasm of defeat.  A few times I was close, a few others not so much, until finally the claw of destiny grabbed tightly around the four corners of the box.  Breathless seconds past as it raised my prize high above, slammed it to an abrupt stop, then crept slowly towards me.  The claw swung back and forth as if its bounty was putting up one last fight before it finally accepted its fate and was dropped lovingly into the retrieval bin.  I had done it!  I had bested the machine, thus extending our dominance over our creations and putting off the robot apocalypse for a few more years.  The picture above shows my wife's hand lovingly displaying her prize.  And we all lived happily ever after.

Email ThisBlogThis!Share to TwitterShare to FacebookShare to Pinterest
Labels: Tokidoki