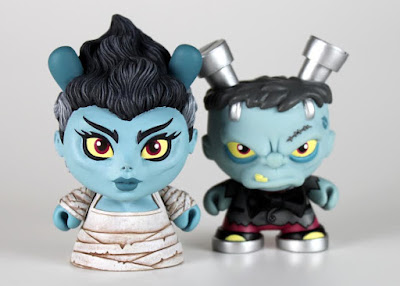 Did you know in The Bride of Frankenstein movie that the title character actually had red hair?  It's hard to tell because the film is in black and white, but there ya go.  Now I did learn it on the internet, so it may or may not be true, but if it is that's a fun tidbit in case you're ever on Jeopardy.  I only ask for ten percent of the winnings as your manager.

Scott Tolleson can make The Bride's hair whatever color he wants because that's called "artistic license."  Which is not considered one of the six points of identification required by the New Jersey Department of Motor Vehicles to get and extra copy of your registration and they don't find it funny if you try that.

Now The Bride wasn't part of Scott's Odd Ones Dunny Series when Kidrobot released it, so he made her up, cast her in resin, and had her join her man Frankie in holy matrimony (oh and Scott hand painted her).  And the groom got spruced up too with a bow tie and a kiss from his lady.  Each set of figures comes with a marriage certificate, is limited to ten, and will sell for $250 when they're released this Tuesday at 10am pacific time from http://www.stolleart.com.