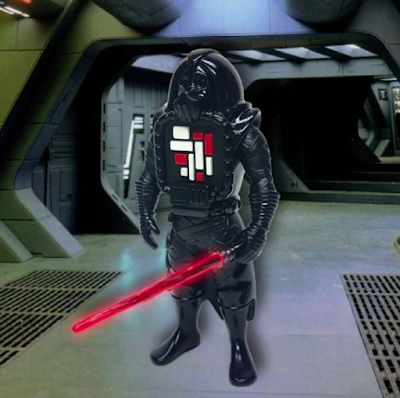 I used to collect Star Wars stuff exclusively before I got into vinyl toys, but there was way to much stuff being produced to keep that going.  So I focused instead on collecting the greatest villain of all time, Darth Vader.  That was until for every one figure I bought they'd release three more versions of it in different packaging.  Buying toys shouldn't be like trying to kill the Hydra, so I've mostly thrown the towel in on that too, save for the odd piece every once in a while.  I had never thought about Darth Vader tribute toys before though, so now I feel myself (and my credit cards) getting sucked back in.

Killer Bootlegs has made a big old vinyl version of his Draco Knuckleduster figure and painted him up to look like everyone's favorite asthmatic evil doer.  And this thing is more limited than the amount of good plot points in The Last Jedi.  Dropping tonight at 6pm cst exclusively through http://killerbootlegs.storenvy.com, you can add him to your growing Imperial forces for $100 (which includes shipping).