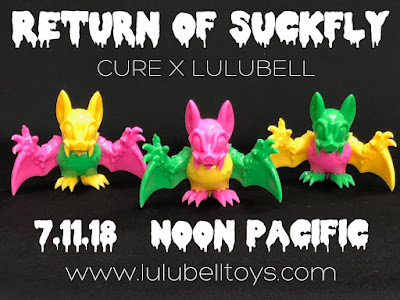 Bats are awesome.  They're like little puppy birds that just want your love.  Sometimes they even seek you out for that love, which is really interesting when they do so by hanging on the curtains in your kitchen.  I lived in an old farm house in Virginia and the bats we didn't know were living in the attic decided that they wanted to check out the rest of the house.  So one day while attempting to get breakfast we found them taking a nap right above the window.  It nearly scared my mom to death but I thought they were cool (like any weird teenage boy would) and rather than disturb them we just left them alone and they moved on to more exciting pastures.  Which was most likely the house next door, which had no electricity and whose residents once forced us to evacuate after building a bomb on their porch with a propane tank.  A small thing like a bat infestation would probably go unnoticed there.

After many moons the Suckfly from Cure has returned in mixed parts form. You don't get to choose your color combo, but how could you be upset by any version of these you get?  The answer is you can't, so stop worrying and start buying when these go on sale tomorrow, Wednesday July 11th, at noon pacific time from Lulubell Toys.