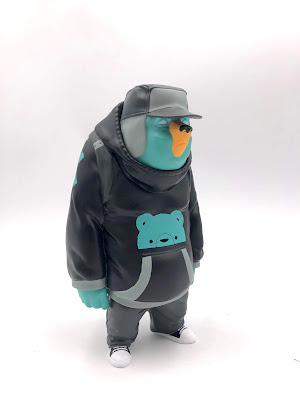 This dude would have instantly died if he had walked out of the house wearing this last week in New Jersey.  The heat would have turned his internal organs into a simmering, probably not so good tasting, soup and his eyes would have popped out of his head like the timer on a Butterball turkey.  I'm not even exaggerating that.  A few years ago we had an intense heat wave going and I had the bright idea for the wife and I to spend the day in Philadelphia.  Now country heat and city heat are two different animals, as what is survivable away from civilization is usually intolerable around concrete and buildings.  So there we are, roasting away like two old chickens when we come across a man wrapped up in a Jeff Gordon comforter.  We're talking wrapped up like a discarded mummy, as in you couldn't see his head nor feet.  This human sized burrito is just laying on the grass by a parking lot with tons of people walking by not even noticing him.  Meanwhile we're both looking for any signs of movement this Nascar blankie is trying to show us and we see nothing.  Either someone has discarded a dead body right off of South Street, or this person has entered a comatose state awaiting cooler weather.  We go back and forth, whether I should nudge him with my foot or whether we should call the police.  I decided not to do the former because what if he was totally okay and then I had to buy him cigarettes for waking him up, so we cross the street and alert someone at a local business so they can call the proper authorities.  (Maybe this was more than a few years ago as neither one of us had cell phones at the time).  We go about our business and ten minutes later we hear all kinds of sirens and police activity, but by the time we got back to the spot where the person was everyone, including him, was gone.  To this day we have no idea whether the person was saved or whether tons of tourists ignored a corpse as they enjoyed their vacations.

Mike Fudge's KUB OG edition may not be a summer weather lover, but this 7 inch vinyl figure is ready to bring the chill vibes to your home.  In fact, he is so chill he might save you money on your electric bill by allowing you to turn that ac off, though UVD Toys makes no claims to the validity of that statement.  And being that this is a preorder he won't ship out until fall, but with only 150 pieces of this version being made available, you won't want to wait until a whole nother season to order him.  Get your $75 ready and pay a visit to www.uvdtoys.storenvy.com to secure yours.