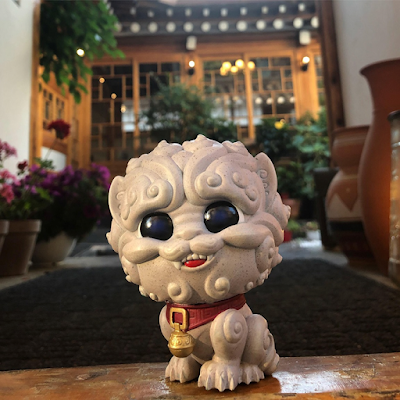 As of this writing, the latest creation from Bigshot Toyworks has far surpassed their Kickstarter goal and tons of these little cats will be making their way to homes around the world when it ends.  They don't need me to help them along, so instead of feeling completely useless I'd like to talk about the internet's plan to storm Area 51.  It started as people just wanting to force the government to show us the aliens they are sure are being housed there and (as most things on the internet tend to do) has degraded into some folks wanting to make sweet love to an extraterrestrial.  While I hope people don't actually get themselves killed bum rushing a secret government facility armed only with cases of Monster Energy Drink and their ability to do the Naruto run, I would love to see them actually go.  Can you imagine 300,000 people showing up and just having a good time in the desert while the military is forced to keep them at gun point?  They'd probably get one of those historic plaques along the side of the road detailing their exploits, and maybe the president would visit to lay a wreath every year for those that get too hype and have to be put down by a sniper after attempting to scale the fence.  We honor your future sacrifice.

As bad as I would like to go to Area 51 and release the aliens I don't really do well in the heat and would just be a sweaty mess.  Instead I offer my moral support to those brave souls, no matter what their true motivation is for taking part.   Speaking of taking part in something, if you want to add an adorable sofubi kitten to you repertoire of toys, then you need to check out this link.  Tons of rewards abound at special prices and includes figures that can only be had as part of this campaign.  There's blind boxed teeny tiny ones and big ol resin versions  and of course the luxurious Japanese sofubi ones.  Start your week off right by filling your home with wittle bay bays.