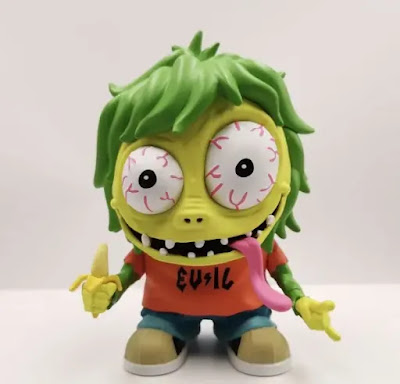 I was first exposed to the work of MCA during the closing of Tower Records.  Amid the bins full of picked through magazines and cds was a box of small figures know as Qees.  I'd always been a figure collector, but this was my first exposure to the world of designer toys and I was instantly hooked. I ended up buying a handful of them, including his tribute to David Bowie's Alladin Sane.

That was longer ago than I'd probably care to think, but it's kinda cool that MCA's designs have literally been in my collection since the moment it started.  Now UVD Toys is taking me on a walk down memory lane with his latest figure, the Evil Ape Fink.  This 4 inch dude looks completely whacked out of his gourd, which is also part of his charm.  I used to work with someone kinda like that, who was pretty useless when it came to doing actual work, but whose life was so chaotic you couldn't wait to hear what nonsense they were involved in the night before.  Jerry Springer could have built a season's worth of shows around their bad decisions

Preorder your OG version of this figure today for only $60 by visiting www.uvdtoys.com.