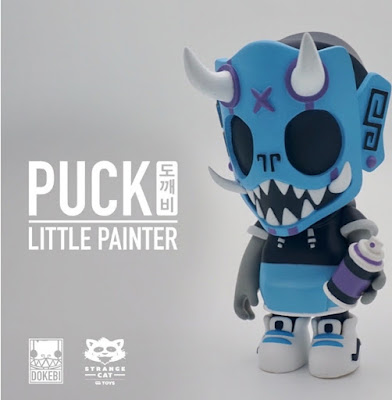 I grew up in the sticks of Virginia, which meant that my exposure to graffiti was limited to insults about someone's sister, usually followed by a phone number.  Thus my pivitol years of artistic taste building involved monsters, horror movies, and heavy metal album covers.  So I generally don't get excited by a toy holding a spray can, cause to me that just means that there's some outdoor furniture that needs a recoat or we're about to deface something out of spite.

So I see this little dude from Chris Dokebi and Strangecat Toys and I think he looks kinda cool.  His name is Puck, who was also the best cast member ever on The Real World, and evidently he's a little Korean folklore goblin that goes around causing mischief and I'm more than cool with that.  I can totally picture him elevating the derogatory graffiti I know into high art while still maintaining its poignant commentary.  That is true art.

As you can see he's all decked out in blue which does indeed indicate that he is an exclusive for Tenacious Toys.  You can buy one today (July 3) at noon eastern time for $75 by checking out www.tenacioustoys.com.
Posted by Chris at 6:00 AM