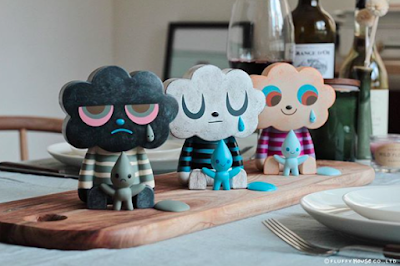 New Jersey weather has been off the chain as of late and two, count em TWO, days in a row we have had a half hour of Biblical grade thunderstorms followed by gorgeous sunshine.  I went to lunch at work one of those days and when I clocked out the sky was black and pouring rain and by the time I clocked back in it looked like a tropical postcard that you would buy in an airport.  The weather is playing with my emotions and I do not appreciate it.

All three of these cloud figures from Amanda Visell and Fluffy House represent what has become a typical day in New Jersey weather, though I'm sure she didn't have that in mind while designing them.  Standing at 5 inches and retailing for $55 each, choosing just one would be as hard as choosing what clothes to wear to accommodate our ever changing climate.  Check em out by visiting https://fluffyhouse.bigcartel.com. 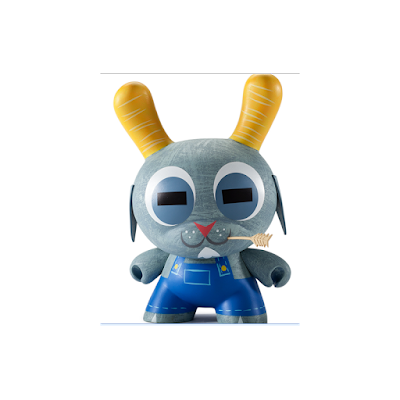 Do you know how you get your farmers name?  You take the name of the street you grew up on and your dog's name.  Or something like that.  I ain't saying I know much about farming, but I have some bushes outside that are making me look like I do.  Seriously, they are banging and most likely making the neighbors jealous cause now all the birds and squirrels and chipmunks are hanging out at my place making it look like a Disney movie.

This here is Buck Weathers, and he is simple country folk who doesn't appreciate your Dueling Banjos or Deliverance jokes.  What he does appreciate is chewing on his bit of straw and firing warning shots at anyone who tries to tip his cows over.  Seriously, why would you freaks want to push a cow down?  If you were really tough you would go bear tipping.

You can get your hard working hands on this country bumpkin from Amanda Visell and Kidrobot on Friday, May 20th.  Oh, and it appears there are two different versions which my superior internet sleuthing has uncovered. 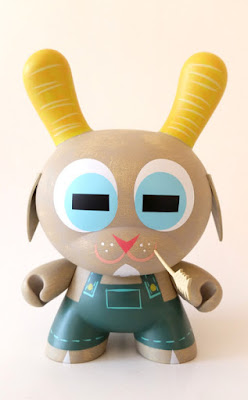 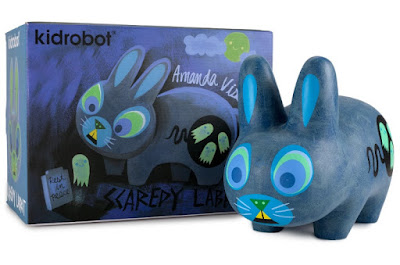 Oh, Lord help me, cause I can feel my money leaving my wallet the longer I look at these.  Some phantom hand has reached in and lifted my credit cards from their place of rest and is attempting to type all of their digits into various websites, ordering the fine Labbits you see before you.  I am but a man; too weak to resist such temptations when laid before me.

Kidrobot knows I love Labbits.  Frank Kozik knows I love Labbits (it's detailed on the restraining order). Amanda Visell may or may not know that I love her work.  Now all three of them have colluded to create this amazing hunk of plastic in not one but two different versions!!!!!!!!  The dark blue version you see above can be had as we speak from your favorite toy retailer, while the light blue one you see below will be an exclusive to www.kidrobot.com sometime this month. 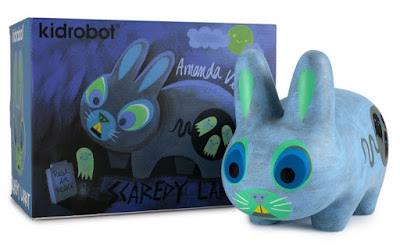 But this Labbit not only looks good; it also answers one of those really important questions that is never covered in a public school education:  what happens when you eat a ghost?  Is there any nutritional value to digesting a spectre?  Can you expect a night full of indigestion after swallowing a poltergeist?  Behold, the answer: 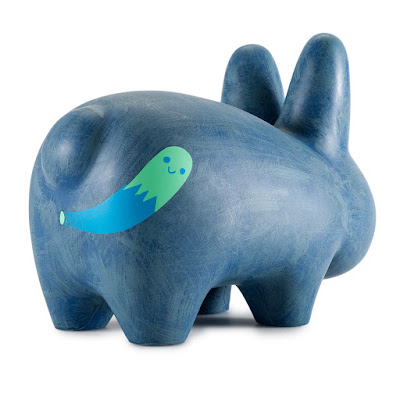 Ghosts are just like corn!!!!!!  So don't bother eating them, because like their vegetable cousin they come out just the same as they go in.  You won't learn stuff like this on TMZ. 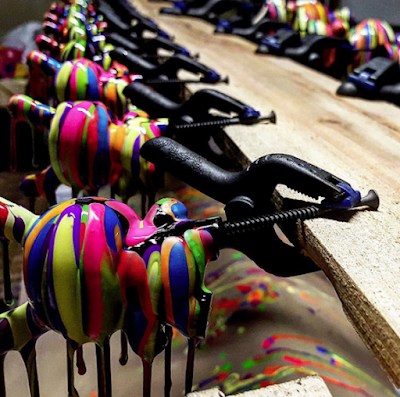 Kidrobot is going to Designer Con.  I am not.  I am sad.

I already have an appointment scheduled to go and talk about my feelings, so try not to worry to much about me as you try to get one of the always popular Blown Away custom Dunnys from Josh Mayhem.  These dudes practically sell out as quick as he can make em, so I can guarantee they're gonna be one of the quickest things to be snatched up during the show.  And rightfully so, cause just by looking at that picture you can tell a lot of work goes into them.  And the finished result looks like candy coated goodness. 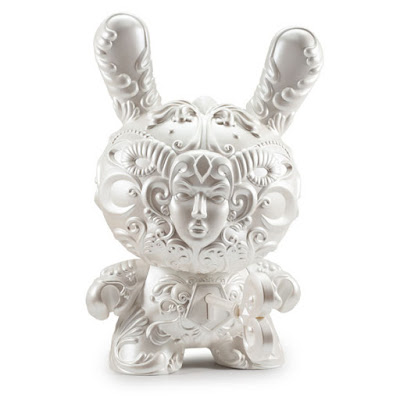 The next version of J*RYU's It's a F.A.D. Dunny is presented in 20 inches of luxurious pearlescent.  You will be the envy of your friends, the subject of dinner party conversations, and the object of vile jealous rumors (its inevitable) once you own one of these beauties.  See, they practically sell themselves.  You can also meet the man behind the Dunny as he live paints one on Saturday at 4pm and again Sunday at 3pm. 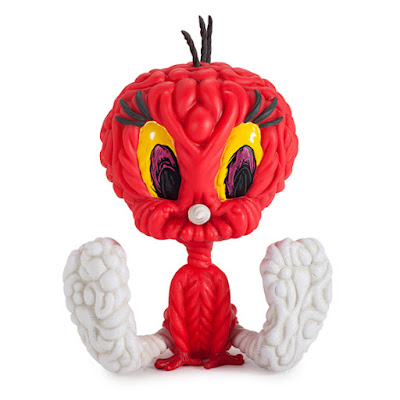 Tweety Bird is kinda putting on a USDA Grade vibe in this vinyl interpretation from Mark Dean Veca.  This certainly won't deter any putty tats from making a delicious mid afternoon snack out of his bulbous head.  This red version will make its first ever appearance this weekend and may inspire a new culinary phenomenon with canary burgers as the staple ingredient.  Pet Smart should stock up.  You can meet Mark during his signing on Saturday at 11am.

There will be more exclusives and signings with Amanda Visell (Saturday at 2pm) and Scott Tolleson (Sunday at 11am) and a panel with Frank Kozik and others talking all things Kidrobot.  Check it all out at booth #'s 518/521.

Even More New Releases from Kidrobot 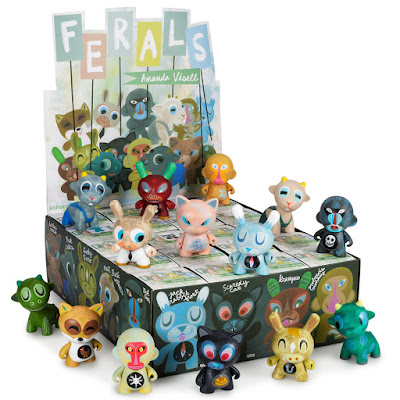 Kidrobot is going to town with all of these recent releases, so much so that I've collected the one's I've neglected thus far into one post to help you maximize your toy buying abilities.  Prepare to be overwhelmed with things you need.

Let me tell you something.  Doesn't it sound real serious when I start a paragraph off with that?  Like I'm on the verge of snapping while interrogating you for a crime you just won't confess to?  Well I've got a witness, bub, and I'm ready to make sure you go away for a looooooooooong time for buying that Insane Clown Posse cd.  Kidding, but seriously, just steal the thing next time so it doesn't end up on your credit card statement.  That will haunt you if you ever need to take out a loan.

What I was gonna tell you is that Amanda Visell's Ferals mini series is beyond adorable.  Not that you can't see that for yourself, but sometimes it's nice to have a bit of reinforcement when you're declaring things the cutest you've ever seen.  Utilizing the Munnyworld and Dunny platforms for her animal creations, these will make even the toughest grown man squee with delight.  They're sold blind boxed for $11.99 each but I dare you to be able to just buy one.  You can't. 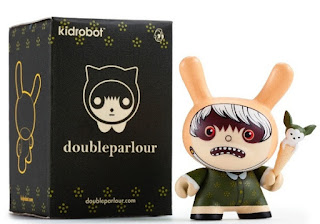 I've coveted this Dunny from doubleparlour the moment I found out it was happening.  I snagged one this past weekend and completely love it.  It's really interesting to see their work transformed onto such a familiar platform and to have been done without relying on any sculpting.  Hopefully this will not be the last version of their work realized in graphic fashion, cause now I'm hooked.  These are available now for $14.99 each. 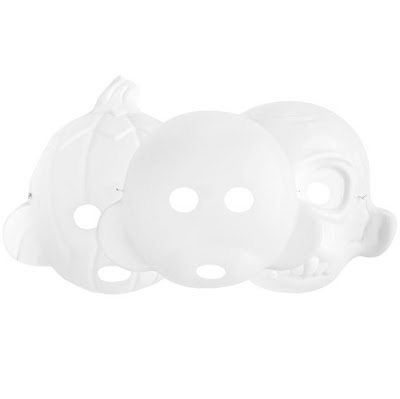 Halloween is coming and everyone would really appreciate it if you put more effort into your costume this year.  Stop going to that dumb store in the mall, buying what you think is "sexy" or even worse "funny sexy" and parading around like you're changing the game.  Instead of scarring your trick or treaters for life, why not get yourself one of these masks.  You can pick from the DIY ones you see above, designs from the new Dunny series from Brandt Peters, or Frank Kozik's uber popular Labbits.  Your friends will thank you.  Available now for $19.99 each. 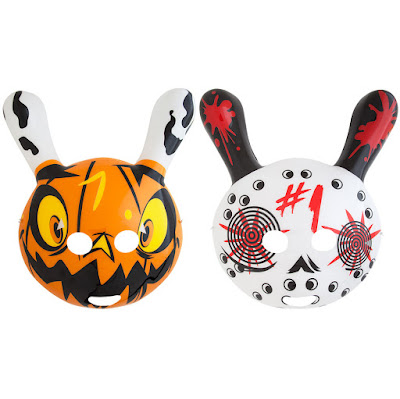 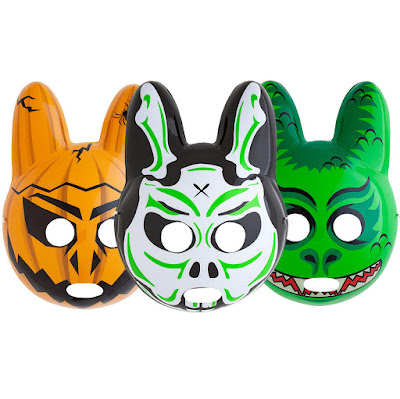 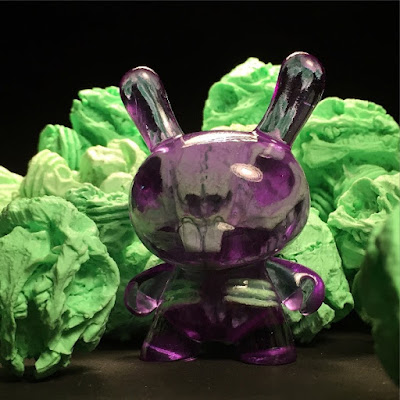 Last year Kidrobot was nowhere to be seen at New York Comic Con and I missed them.  I missed them so much that I sat where their booth had previously been and quietly mourned their absence.  This seemed to be awkward to the other people who were set up trying to hawk their wares, and security wasn't really the most understanding group of individuals I've met, especially as they were dragging me out from under the table with what my lawyer said was not actually an excessive amount of force.  The good news is I fired that idiot and Kidrobot is back with not just a booth, but a pop up shop, which sounds way more better.

What is sure to be the hit of the show and a guaranteed sell out are these Infected Dunnys from Scott Wilkowski.  Available in either grey or purple (50 of each color) these suckers are gonna be $60  a piece.

Of course that is just one of a plethora of offerings that will be available to con goers.  You'll also be able to buy tons of toys before they're released anywhere else.  Things like J*Ryu's 8 and 20 inch Dunnys, or Amanda Vissel's Ferals mini series. 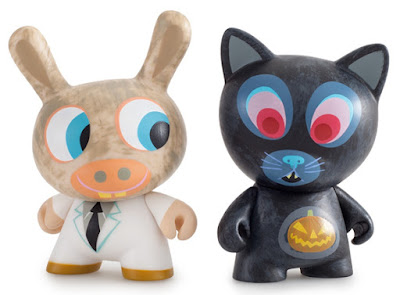 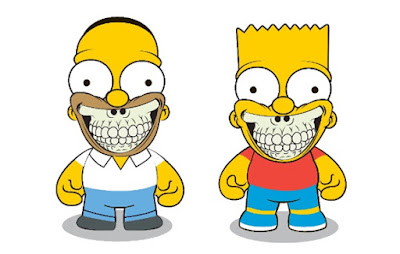 They'll also have the new Simpson's figures from Ron English and my personal favorite, doubleparlour's debut 3 inch Dunny, which is a must have for me: 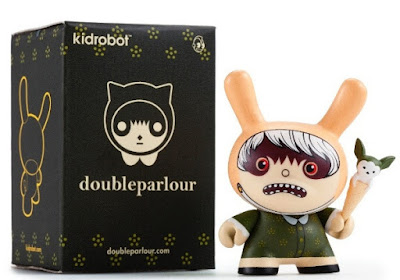 What other surprises will they have in store?  You'll just have to wait and see when everything begins later this week.  You can find their pop-up shop as part of Clutter Magazine's booth #603 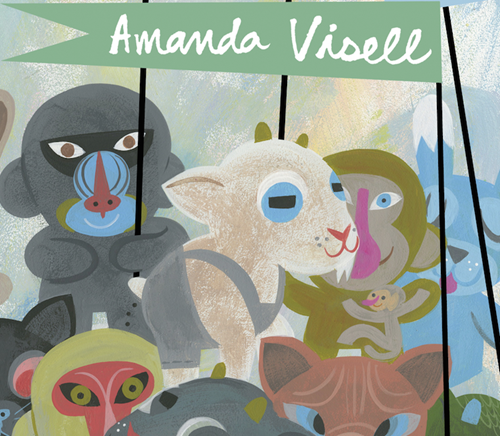 I'm not one to post teaser shots as I prefer to tell you about stuff that is ready for purchase, but this one has a special place in my heart.  You see, back in February, my wife and I made a pilgrimage to an unholy frozen tundra known as New York, nearly losing our unmentionables to the frigid temperatures.  There we had a vision, one in which Amanda Visell and Kidrobot would release an entire series of her work on various Munnyworld platforms.  No longer would those animal shapes be reserved for the customizer, nay, they would be available to the world's best artists to bring their visions to life as production pieces.  I told you of this prophecy upon my return (and the thawing of my typing fingers) and was called a heretic, a blasphemer, and yet here we sit with another piece of the mystery before us.  The first sign was this: 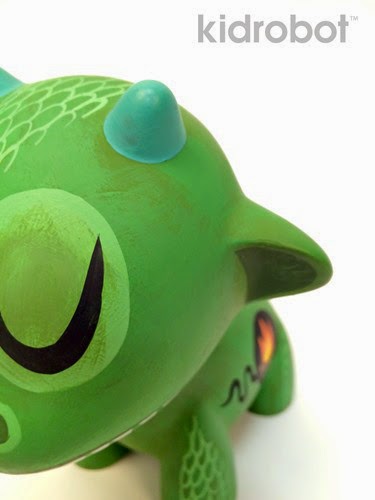 Oh, woe unto you non believers, for it has been foretold and it is now coming to fruition.  And once my first vision is complete and available for you to covet I shall promptly apply for tax exempt status and move The Toy Viking headquarters to a secure compound in the midwest, where I may continue to deliver toy prophecy and hide my assets from the IRS.  Feel free to start your donations any time now.