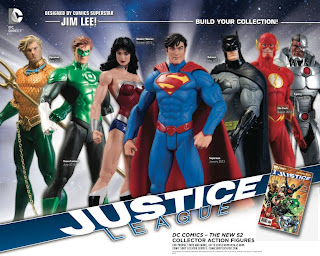 All you come c book readers have probably already seen this as DC Comics has been placing their ads for the New 52 figure line in its recent releases. All of the toys have that new, modern design that was part of the DC relaunches. Overall I like the looks of the figures, but Wonder Woman is a little intimidating. I mean look at those arms! She looks like she hangs out at biker bars and arm wrestles ex convicts for pocket money. That's a scary woman. Kudos to Aquaman for looking a bit tougher than we're used to, though he still could be a Sears underwear model. But one that could maybe defend himself from your taunts if he was with a school of obedient fish buddies. Maybe.
Posted by Chris at 1:00 AM