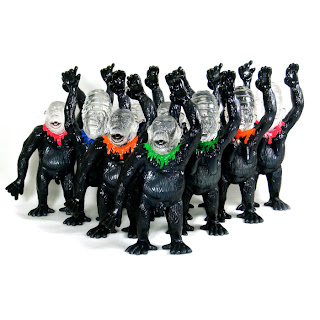 Ok, as per usual I'm a bit late to the party as a few of these zany primates have sold out since they went on sale a few days ago. I can't tell you what I was doing, or where I was. We'll just have to leave it at that until the statute of limitations run out.

So being that some of these Headless Apes from MonstreHero have sold out and you probably want to get yourself one, I'm gonna get right to the point. Each color has both a male and female version, each one is $75, and they can be purchased by going to http://monstrehero.bigcartel.com/. Go and get yo monkey with the ghost head now!