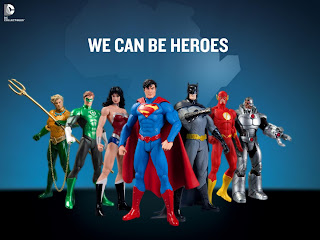 The C2E2 convention was held in Chicago this past weekend, and while I didn't personally attend, I have found out some fun things through the magic of the internet.  I showed you these figures from The New 52 line of comics already, but DC has announced that you can purchase them all at one in a special 7 pack and part of the proceeds will go to We Can Be Heroes, which has been established to help fight hunger in the Horn of Africa.  Oh, and if that isn't enough to get you to buy them you also get the Superman figure before he's released anywhere else.  See, everyone wins.

They also showed everyone this Dr. Manhattan statue that will be part of their Before Watchmen collectibles line.  Most people have already deemed this prequel to the legendary Watchmen as an act of heresy, but we have to look past that and be appreciative that they were nice enough to cover his ding-a-ling on this toy.  The movie was amazing but all anyone could talk about was his Smurf all out and about.  Penises are distracting and nothing can be taken seriously once one has been spotted.  Not that his Speedo is a vast improvement, but at least I feel like I can have a conversation while this thing is in the room and not feel the need to point. 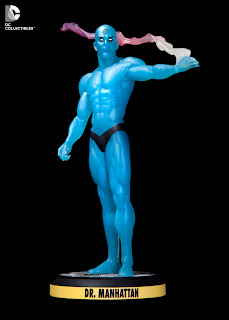