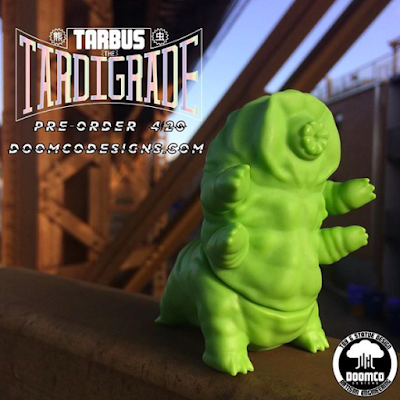 How often do I get to write about things that are making history?  The answer is never, I literally have never written about anything of historical importance.  That all changes today though, because I am proud to present to you the first ever toy that was created in virtual reality.  That's right, this little cutie was sculpted in not the real word, somehow brought to reality, and made available for preorder starting today. Sounds like something crazy from the Matrix, and it has not been confirmed that when this dude was produced that no other virtual reality monsters escaped with it, jealous at our reality and hell bent on destroying it.  If we could go ahead and prove that is not a thing that would be great, ok.

Doom Co Designs is responsible for traveling to digital Narnia and sculpting this dude, while Squibbles Ink produced him.  The preorder window for the only microscopic creature I would hug on a rainbow is open from today,  April 20th until April 27th.  He stands 3 and a half inches tall, is made from vinyl, and costs only $25.  Buy a ton of them and your happiness will be nearly as hard to kill as they are.