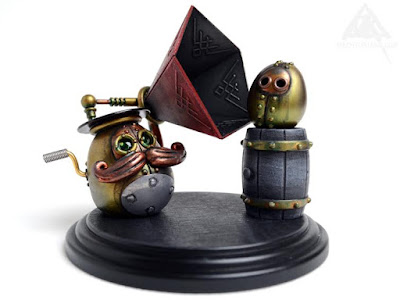 My cats have the oddest tastes when it comes to food.   God forbid you try to sneak anything with chicken past their noses, as you might as well have called them an offensive slur.  Our smallest kitten discovered the other day, through no fault of our own, that she has a hankering for baked beans.  We heard the tell tale noise of her licking the sauce off of them and by the time we could get to her she struck like a cobra and made off with a bean.  Thankfully it didn't have the same effect on her that it seems to have on humans.

Taylored Curiosities will be holding down the fort at Toy Con Uk this weekend by showcasing some customs of her famous bean sets.  She's got some big names to ply their trade on her resin beans and the results cannot only be seen, but also purchased at the show.  Take a gander at a few of my favorites: 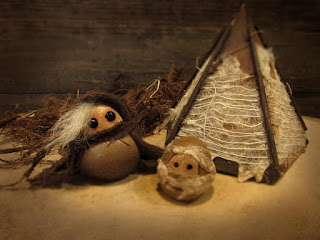 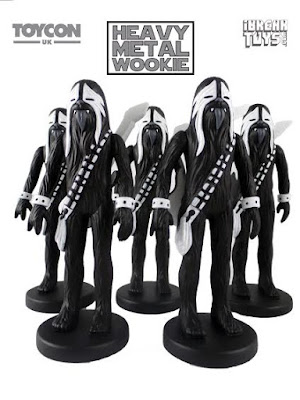 Chewbacca has finally realized that his epic shredding alone does not a band make.  You need someone to bring the thunder to your lightning, so he went out recruiting. He traveled far and wide, eventual;ly finding himself drawn to Endor by the sickest blast beats his ear drums ever bled for.  Little did he know that the Ewok's little arms and stubby legs are the perfect combination for hellish beats that keep the devil himself awake at night. 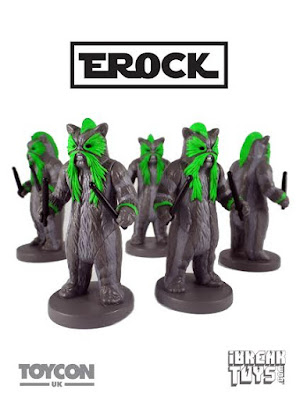 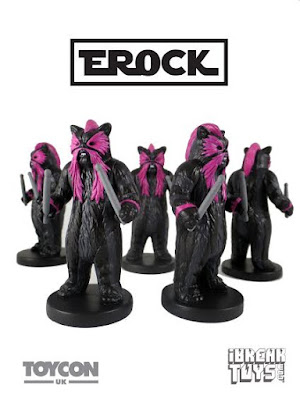 I love Star Wars and I love metal, so the toy stylings of Lisa Rae Hansen have a special place in my black little heart.  But lest you think she's only interested in galaxies far far away, cause she's also invading the world of Nintendo with the debut of Super Metal Mario.  Everyone's favorite plumber's got a Lemmy-like makeover and looks ready to rock the Mushroom Kingdom.  Or whatever's left of it, cause dude is pretty destructive.  And he kills a lot of bad guys while trying to rescue his woman.  Murder and mayhem are pretty metal! 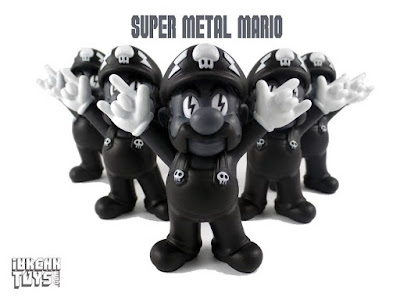 All that you see here will be available at ToyCon UK Saturday, April 9th in London.  Go buy, say hello, and start building your dream band from the ground up that will hopefully be so amazing that they'll never have time to play another Red Hot Chili Peppers song on the radio ever again.
Posted by Chris at 7:56 AM No comments: 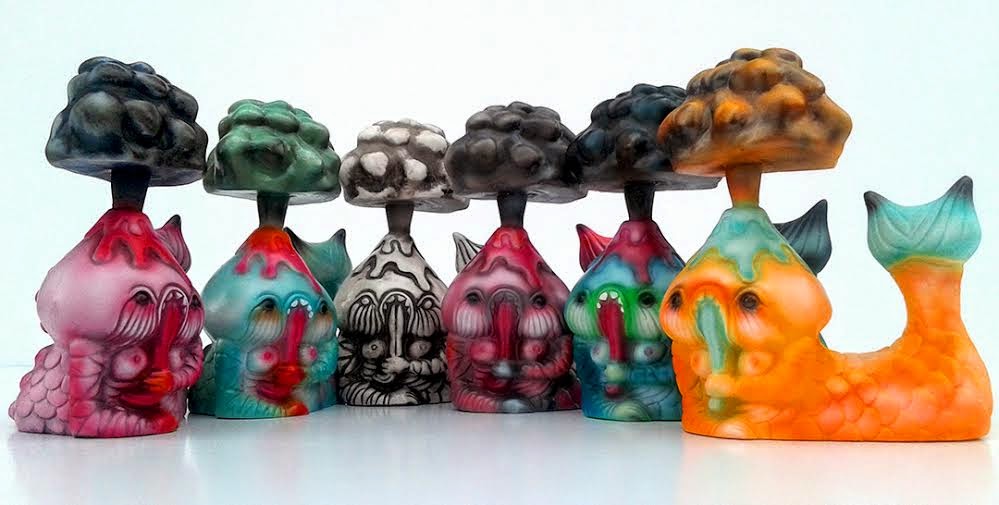 How crazy are these figures?  They're like some technicolor Lovecraftian nightmare and I love them.  These are the spawn of artist Naomi Knaff and they will all be available at next week's ToyCon UK at booth number 27.   I wouldn't be surprised if each one contained the soul of some ancient monster that roamed the earth long before we did, in which case you shouldn't put it somewhere that your cat could knock it over and unleash what is probably a very pissed off spirit.  Cats are always doing that stuff. 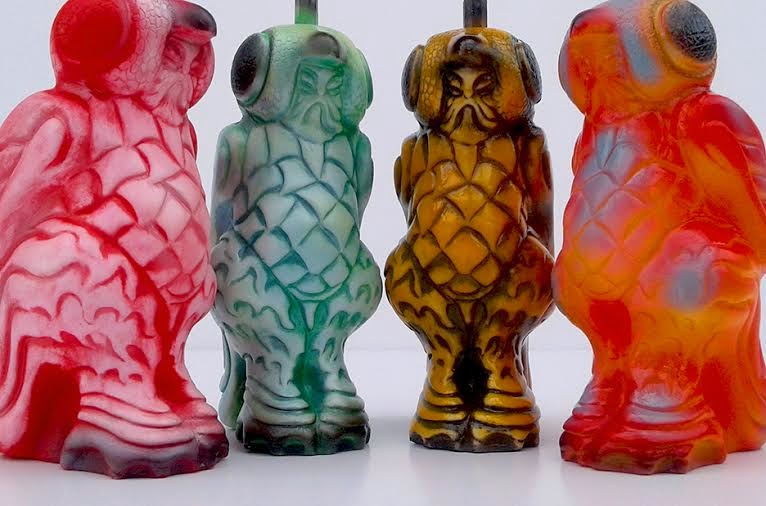 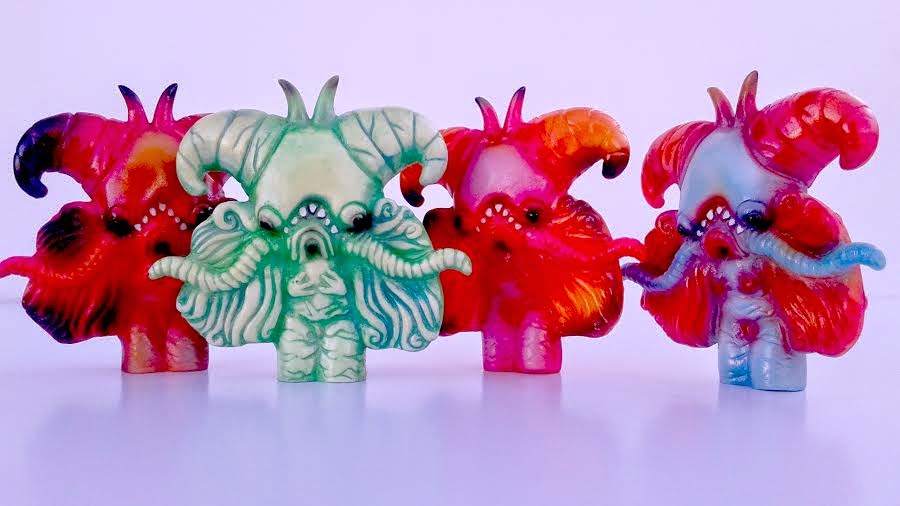 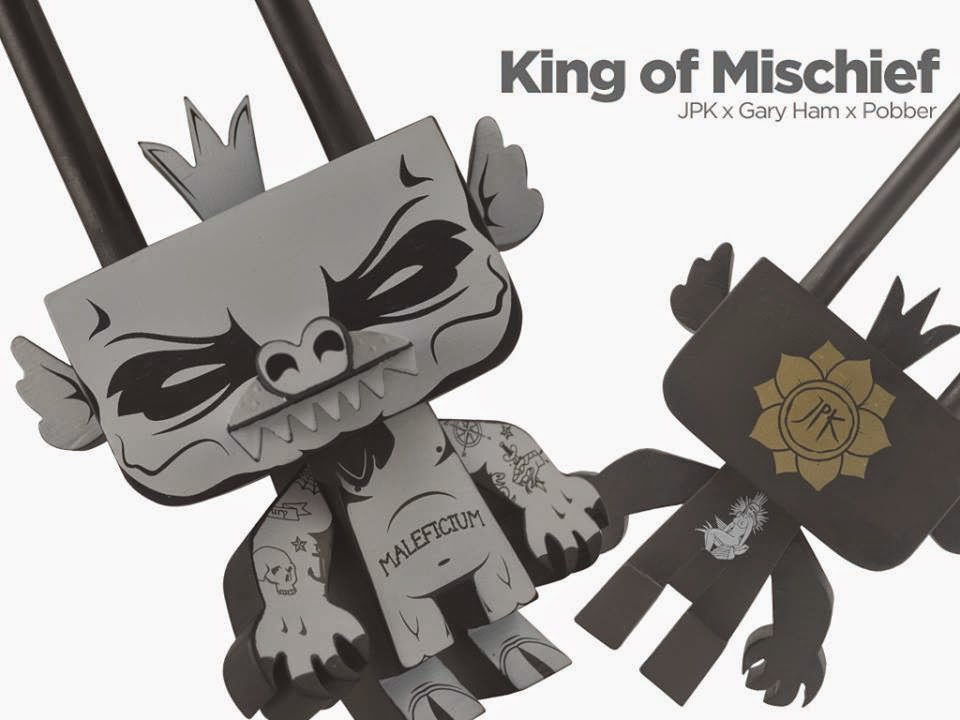 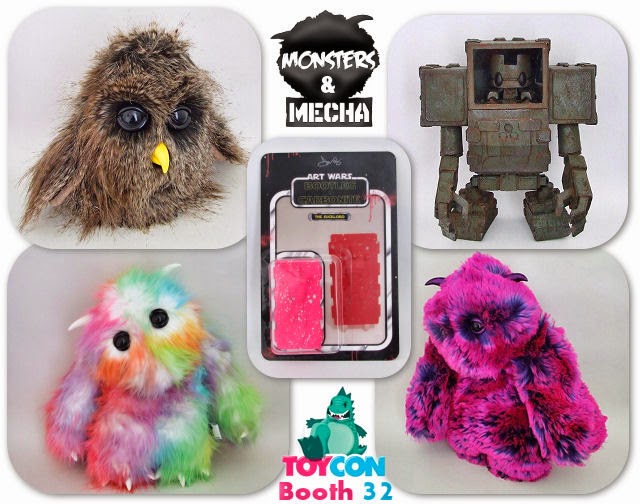 Do you like fuzzy monster critters? Do you like skulls?  Do you like professional wrestling?  Well, two out of three of those will be available at the Monsters & Mecha/ Skelevex booth at tomorrow's ToyCon UK.  Just look at all this cool stuff they have.  I'm officially jealous of all of you that get to go to this event.  Booth #32 is poised and ready to take all of your money.  I would probably buy all of the Skelevex because each time I look at one I want it more and more.  And then I'd be broke and I'd have to paddle across the Atlantic Ocean to get back home, which would probably make me extremely late for work. 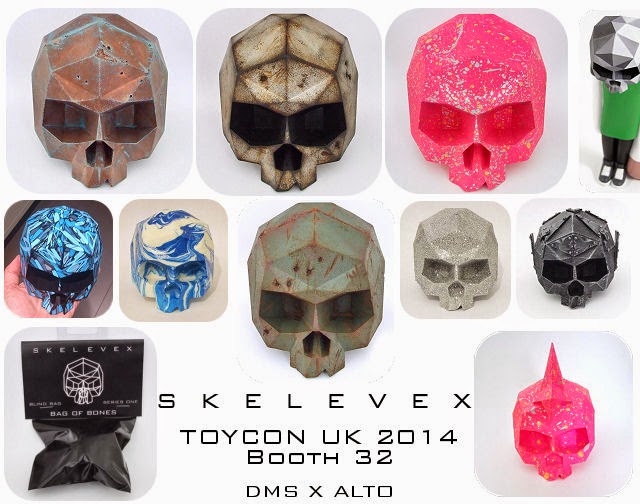 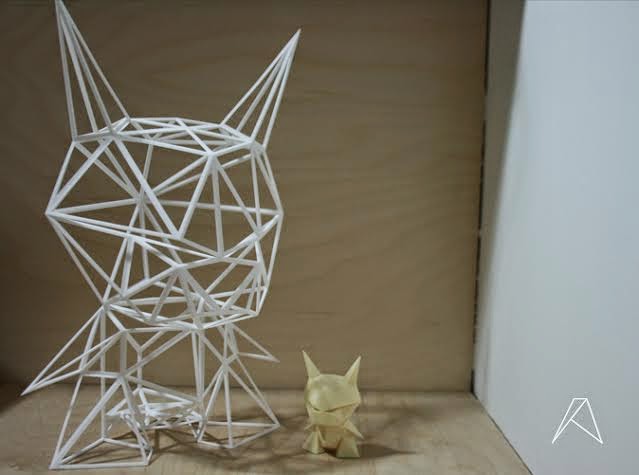 I did terrible in geometry class the first time I took it in high school.  By then I had already discovered that grunge music was my calling and I was gonna be the next Nirvana.  What the hell did I need to know about acute angles and such when I was gonna be on tour playing songs that teenagers would listen to just to piss off their parents?  So I failed.  I failed hard.  Not only at geometry, but my music career never got off the ground, pretty much because I have crippling anxiety that prevents me from stepping foot on a stage, let alone playing guitar or singing in front of someone.  But I still think about it sometimes, that I'm not too too old to write some angsty anthems.  However I never think about geometry, or the fact that it took me two times to pass it.

alto was much better at the weird math than I was, because he makes his living making cool geometrical objects.  I love the Wired editions of his Evil Origami and Skelevex toys.  Stripping these down to a complex frame work makes them interesting to look at in completely different ways.   You can buy these right now from his Shapeways store by going to http://www.shapeways.com/designer/alto. 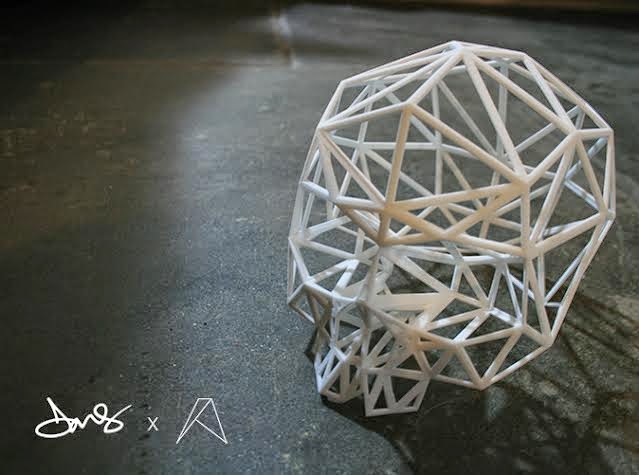 They will also be at ToyCon UK tomorrow for those of you in attendance.  He will also be involved in Fugi.me's Power 5 series, in which 5 different artists created 5 resin pieces in 5 different colors.  This little one inch tall guy is his offering to the series: 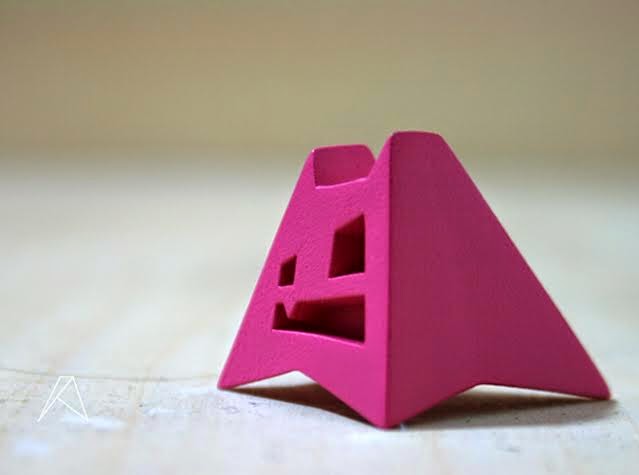 And be the first to see in person his collaboration with RunDMB entitled "Project X".  This thing is massive and crazy looking and I'm sure you'll be able to learn much more about how to buy one very soon. 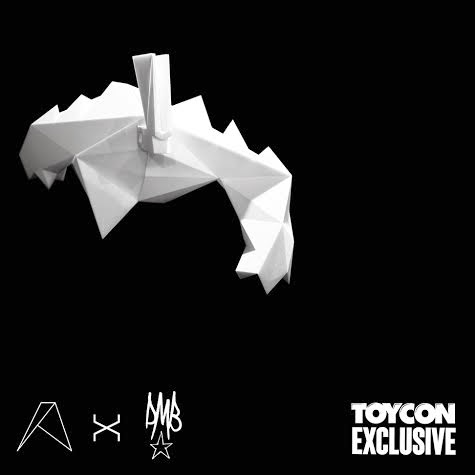 When Wookies aren't ripping your arms off and beating you to death with them for defeating them at space chess, they like to form bands and tour around the galaxy.  And they only play metal that would melt the skin right off your face.  You won't necessarily find this bit of information in any of those Star Wars books, but I've never lied to you before.  Except that one time about that thing.

Lisa Rae Hansen/I Break Toys/international woman of amazing art toys fame, has outdone herself with these Heavy Metal Wookies.  Each color is limited to 10 pieces, with 5 of them being available at ToyCon UK tomorrow and the other 5 going online shortly after at http://ibreaktoys.storenvy.com/.  She'll have a bunch of other cool stuff at her booth if you're lucky enough to be going to the convention, so stop by, say hi, and buy lots of toys. 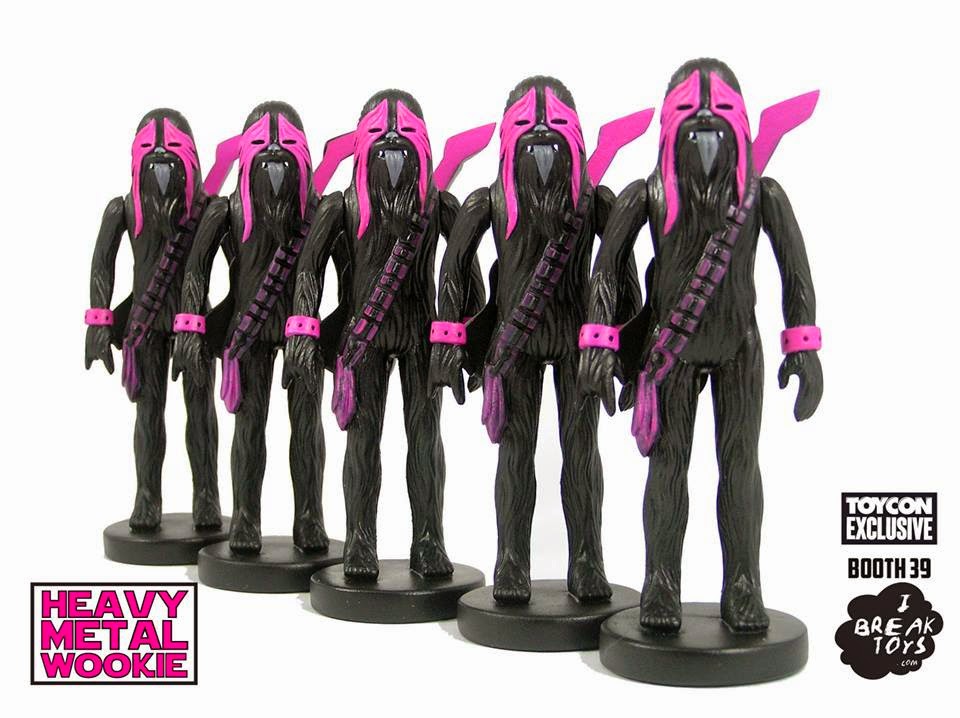 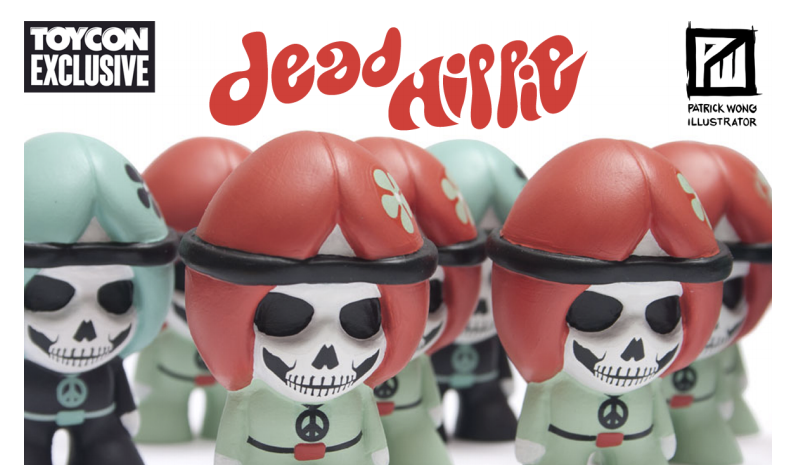 You know what I always say: "The best hippie, is a dead hippie."  Actually, I've never said that, because hippies were long extinct before I was born.  I guess hipsters are sort of the same though, because they both have that natural, unwashed look.  Who cares about that nonsense though, cause these Dead Hippies from Patrick Wong are pretty awesome.  These little dudes are exclusives to Artransmitte's booth at ToyCon Uk tomorrow.  Only 30 exist and are sold blind with a 1/6 chance of getting a mint green chase. 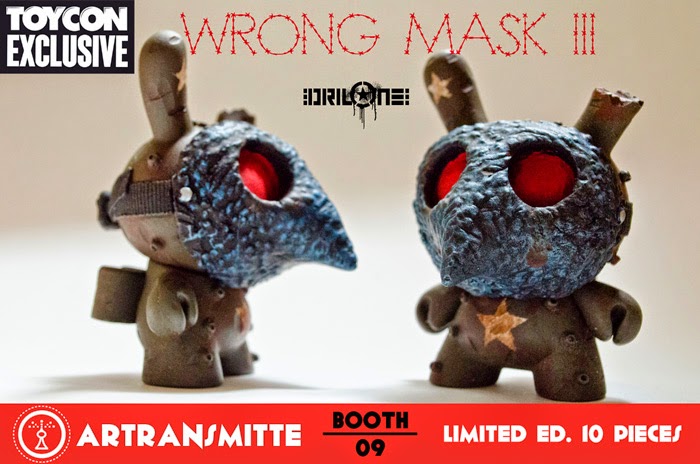 Even more limited are these Wrong Mask 3 Dunnys from DrilOne.  Only 10 of these guys doing their best raven cosplay were made and were inspired by the artist's visit to the Tower of London and the raw-meat eating ravens that hang around the place.  Maybe they are the souls of the dead who were executed there.  Or maybe they're just hungry birds who love a free meal.

Any leftovers from the con will be made available at http://www.artransmitte.com/.

Platform A OpenSource 2.0 from alto for ToyCon UK 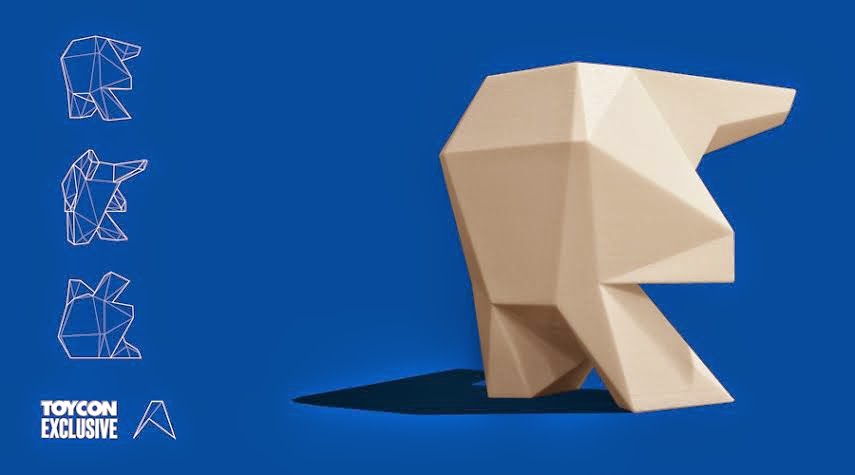 Generally, it is frowned upon if you take someone else's work, mass produce it, and make tons of money.  But if you buy the design outright, it is yours to do with as you please.  alto is giving you a chance to start your own toy line or just have something cool and rare to look at with his OpenSource 2.0 figure.  Entitled "Platform A", there is only one of these in existence in the whole world and if you buy it you are also buying the rights to do with it as you please.  Make a million of them, or just keep it locked away in your toy hoard.  The choice is yours and for £100GBP, I can almost guarantee that someone is going to be quick to snatch this up when it's made available at ToyCon UK.  Start your own factory and put those annoying neighbor kids to work! 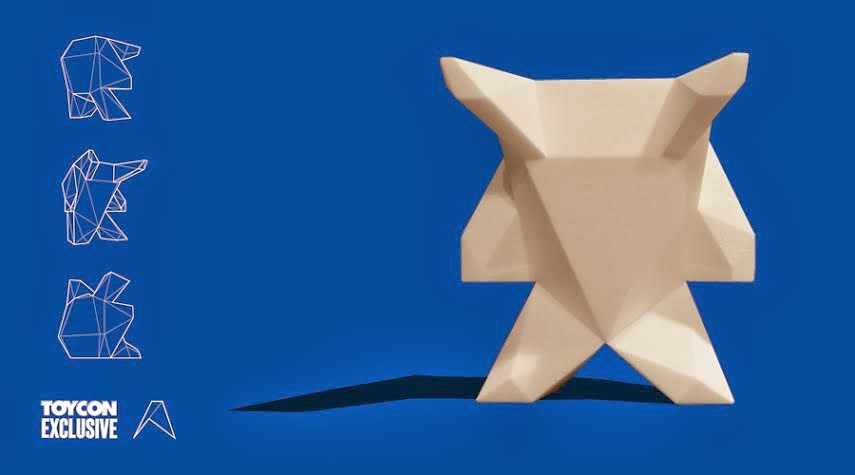 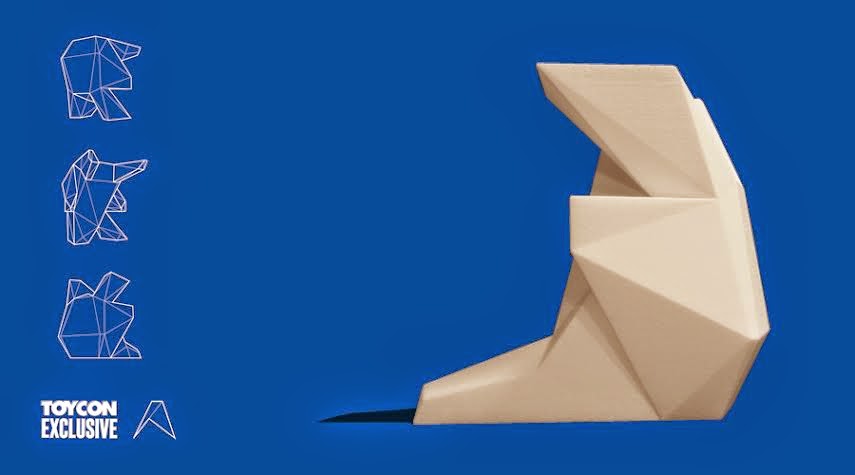