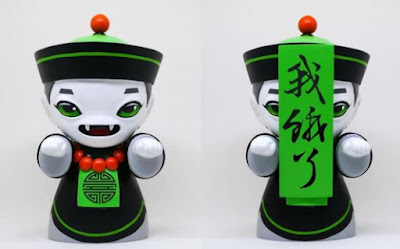 When you think about traditional American horror films, the terror is usually confined to one specific area.  It could be a town, or an abandoned camp, or a haunted house, but generally if you can remove yourself from the scene you will live to see the sequel.  Not so much with Asian horror, as those bad dudes follow you around like they attached a GPS to your behind.  No matter where you go once you've come into contact with something that wants to kill you it's too late.   Kind of like shaking hands with a Juggalo.

Stranger Factory will be unleashing these adorable yet somewhat deadly vampire figures from Otto Bjornik on Friday, May 20th in this exclusive colorway.  He comes with a removable magnetic talisman that helps calm his thirst for blood, is limited to only 35 pieces, and there's a special 1 in 7 gold chase figure as seen below.  Snatch one up when they go on sale through http://www.circusposterus.com. 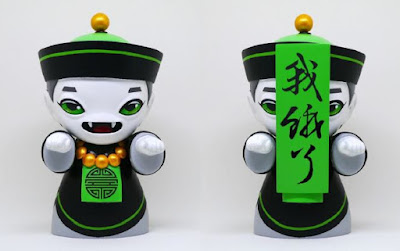