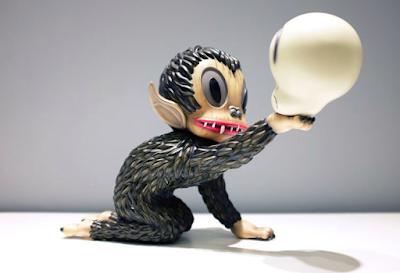 A Florida man strikes again!!  Did you see the video of the guy from Florida getting arrested while a monkey wearing a diaper clings to him?  All of the best news stories begin with the words "a Florida man" because for some reason people in that state seem hell bent on doing the craziest stuff.  Nowhere else in the country comes even close to the antics of Florida, which I have developed a theory about.  I blame it solely on humidity.  Those of you that live in a place without it may be blissfully unaware of how disgusting you feel when the air is hot and damp at the same time.  It messes with your mind and can make stealing a car with a monkey coconspirator seem like the best idea you have going for you.  It's probably not that at all and that Florida has been cursed since existence.   I was just trying to be polite.

This is not the same monkey from that viral arrest video as he is currently awaiting trial for his part in the automobile theft, this is Ahwroo created by Gary Baseman.  There's something sweet/mildly unnerving about the gleam in his eye as he gazes up his little skull friend.   Did he harvest that little bone helmet himself, or did he happen upon it in a field as it lay there waiting to be discovered?  Ask him yourself when this primate goes on sale tonight at 10pm eastern time from APPortfolio.  Made of polystone, this limited edition figure can be found exclusively at http://garybaseman.com.