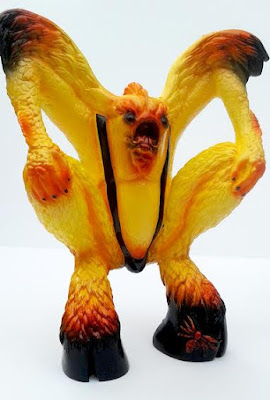 If you're ever wandering through the woods, as I know many of you are apt to do, and hear a noise that sounds like it could come from this creature, you better run like you just loaded up at the Golden Corral and the nearest toilet is but a lonely speck in the horizon.  See this here is Donny, and despite having a genial name like he would play in your dad's softball league, this dude is all business.  He looks like some sort of devil chicken who's only means of concealing his modesty is one of those bathing suits from Borat (you can Google that if you want to see it, cause there's no way I'm posting a picture of it).  He probably killed Colonel Sanders and has dire intentions for the entire Perdue family.  Did I ever tell you that I met Frank Purdue once at a movie theater?  It was when they released the original Star Wars movies and he and a woman not much older than 30 (dude was like 150 at the time) who looked like she was in training to be a centerfold walked out right behind us and I held the door for him.  His son, who has taken over staring in the tv commercials, was right behind him and had a look that didn't seem to approve of his father's choice in ladies.  I thought he could do worse for a stepmom. 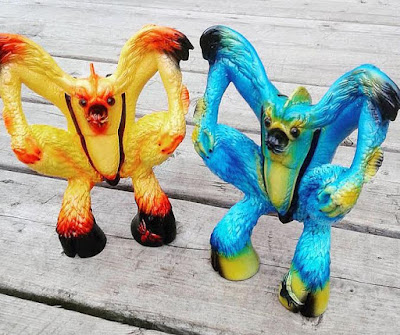 Naomi Knaff will be releasing her latest resin creature on Sunday, May 1st, at 5pm eastern time only from http://www.naomiknaff.com.  This sucker stands 7 inches tall and is solid as a brick.  Pick one up before you watch WWE Payback you'll have the best Sunday ever. 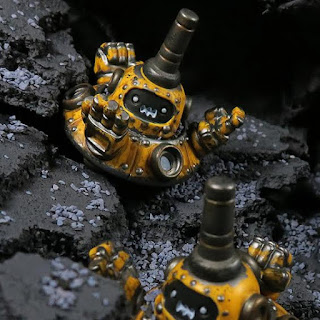 Remember when toys used to be simple?  Of course you don't, cause that was way before any of us were born.  From what I've heard kids would be thrilled to death with an empty can of beans that they could just kick around in the street, or a pile of rocks that they could throw at each other.  When I was a kid all toys consisted of a thousand plastic parts and stickers that had such strong adhesive that if you messed up their placement you ruined the entire thing.  No wonder I'm so OCD now.

Let us reflect on the simpler times once again with the Mecha Top from Inami Toys.  Combining the classic game of rock, paper, scissors with the always amusing spinning top, this resin creation is a new fun way to gamble with your friends and take all of their money.  I don't believe in friendly competition.

These are limited to only 8 pieces and will go on sale April 28th at 8pm eastern time from www.inamitoys.com
Posted by Chris at 4:46 AM No comments: 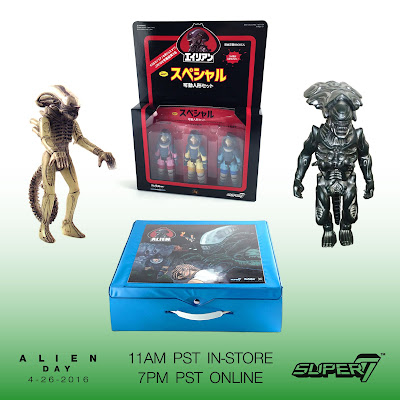 Tuesday, April 26 has been officially dubbed "Alien Day".  I don't know if this was something symbolic that they did in congress, I just know I don't have the day off from work to celebrate it to its full potential.  I'm sure it was just some oversight, what with all the primaries and election thingys going on now.  All the important business seems to slip through the cracks.

The best part about Alien Day is that Super7 is releasing new toys to commemorate it.  You could get yourself a sweet retro action figure case with an exclusive glow in the dark Alien inside, a 3 pack of the Nostromo crew members in special packaging just for the day, or the new 6 inch soft vinyl debut of the Alien Queen in collaboration with Secret Base.  Everything will be available in Super7 stores beginning at 11am pacific time and then online for the rest of us at 7pm pacific time.
Posted by Chris at 4:40 AM No comments:

Email ThisBlogThis!Share to TwitterShare to FacebookShare to Pinterest
Labels: Secret Base, Super7 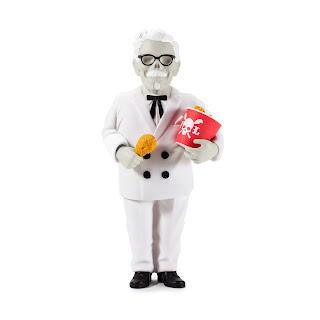 Oh my goodness you know I need one of these fancy chicken dudes from Frank Kozik and Kidrobot.  It would look so good next to my Colonel plastic bank that I got at the end of last summer. There he was, shining like a plastic beacon of amazing in an antique shop in Washington State, and I knew I had to have him.  The dude is an icon of deliciousness and deserves to be celebrated for his achievement.  I also bought a metal wall hanging that depicts two elk that some dude with a torch carved out, but that's not really relevant to anything or I would have brought that up sooner. 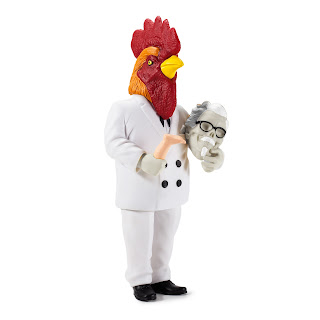 Is this an homage to secret herbs and spices, a depiction of what eating too much chicken will do to you, or the penance that a southern gentleman now faces who built an empire on the backs of genetically enhanced poultry?  Why don't you ask Frank himself when he appears at 3DRetro in Glendale, California on Friday April 29th to celebrate this toy's release.  They'll have both the regular white version and some of the black and gold Kidrobot exclusive editions for sale and if you ask real nice maybe Frank will draw you a smorkin chicken on the bucket-shaped packaging.  Or maybe he'll be mad at me for suggesting that and having to draw farm foul all night long.  Oops. 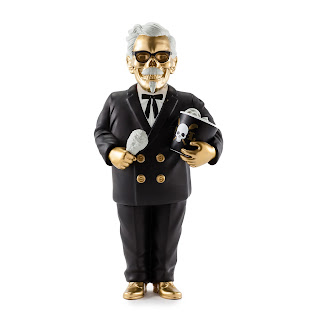 The whole shindig starts at 7pm and lasts till the fun runs out (or some predetermined time I don't know about).  Supposedly there will be actual fried chicken there as well, which is the sign of a good party if you ask me. 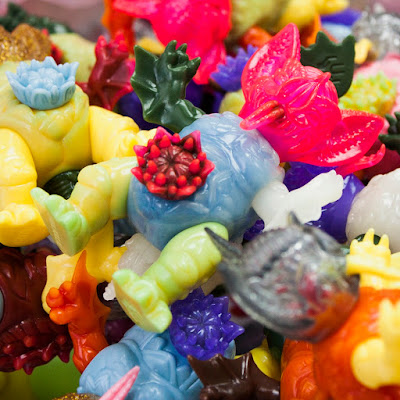 In the summer I always look like I'm made of mixed parts, cause my head, neck and arms will be tan, while the rest of me is the color of one of those cave slugs.  I never try to get tan in the shape of my shorts and tshirt, it's just the hand I've been dealt as a modest dude who refuses to walk around without a shirt on.  Not only would it make me uncomfortable, but I feel as a responsible nipple owner it is my duty to keep them safe.  I've said too much.

These suckers are gonna sell out so fast and be all over Instagram in plenty of situations that will make you mad jealous if you can't participate.  So when these Mockbats from Paul Kaiju and Unbox Industries go on sale Saturday April 23 you best be ready to get one.  They're sold blind so you can't pick the colors, but just getting one is gonna be so awesome it won't matter which color combo you get.  They're only going to be available from store.unboxindustries.info. 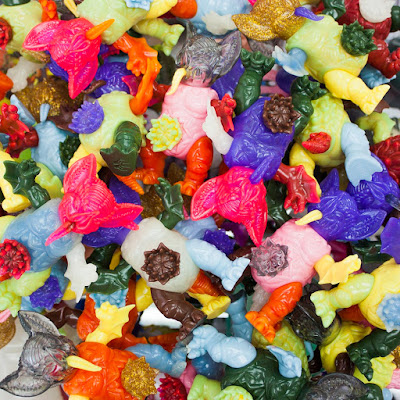 Dresden Lady Wave 1 from 3A 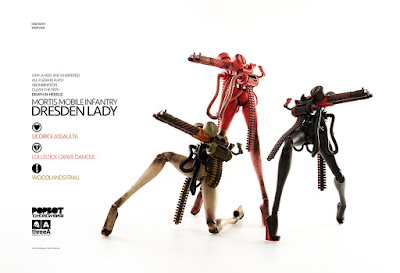 Warfare is getting weird.  Just when you think countries are going to be leveling each other from afar with those remote controlled drone things (and you thought they were just for creeps trying to record you through your window) I see something like this.  I mean, I guess if I was going to be gunned down having it come courtesy of a killer pair of legs isn't so bad.  The getting gunned down part still sucks mind you, but at least I'd be distracted as my body spontaneously erupted my guts everywhere.  It's all about perspective.

3A is unleashing the latest in infantry on April 28th when these three maidens of the battlefield will be available.  Each one will be $160 through http://www.bambalandstore.com. 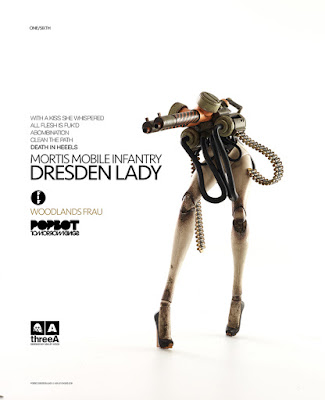 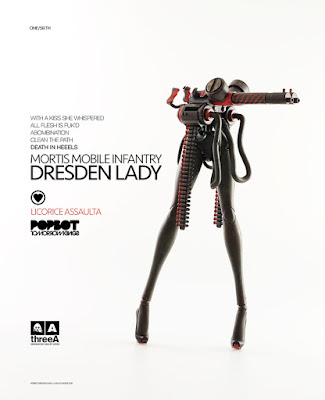 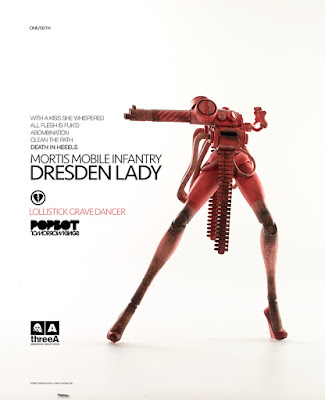 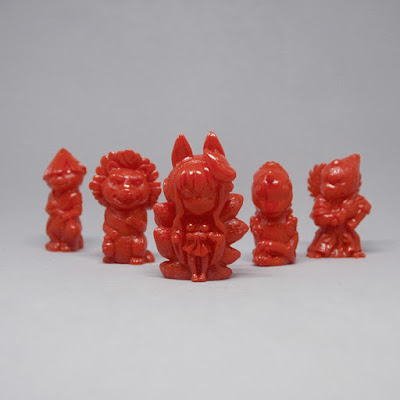 I love a deal and I really love deals when they involve toys.  You can want a toy real bad but you have to have it the moment when there's a deal involved.  Candie Bolton and Toy Art Gallery are gonna help you fill those nooks and crannies in your display cases with these Oh My! Yokai gachpon series and in case you're bad at catching drifts, there's a deal involved.  See, you could be irresponsible and buy only one of these amazing little figures for $10 or you could get all five for only $40.  That means you're getting one for free, which is the best kind of deal.  And this is the debut of the set, which means you're getting in on the ground floor of this thing.  Be an early adopter when they go on sale Friday, April 22nd at noon pacific time from www.toyartgallery.com.