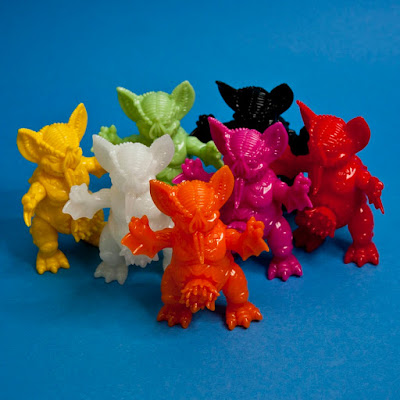 Paul Kaijus's Mini Mockbats are releasing tonight via Unbox Industries which is good cause I've been mad jealous at all the pictures I've seen of them from Designer Con.  They're so dang cute and look like they would sit perfectly in the pocket of my work shirts.  Then when someone is being unreasonable I could pat him on the head and say "shhhhhhh little buddy, we're going to try and handle this one without the hatchet."  Customer service issues would be solved in a matter of seconds.  See, people have the belief that no one that they're dealing with will just snap on them, thus making them act much more unreasonable in these type of situations.  But if you put it out there that their attitude is revealing a dark twisted side of you that may or may not take advice from a toy in your pocket, people might think twice about demanding to return something they bought four years ago but swear they never used and want to speak with a manager right away because obviously you can't give them the satisfaction they demand and are just continuing to waste their time which is by far more precious than the time they are wasting of yours as they continue to spew nonsense.  It's never happened to me, but I've heard stories.

These little bros will be on sale today/tonight sometime over at http://store.unboxindustries.info.  Each figure is $40 and sold randomly, so you can't pick your color.  They all look good to me so I'd be happy with any of them.
Posted by Chris at 7:17 AM