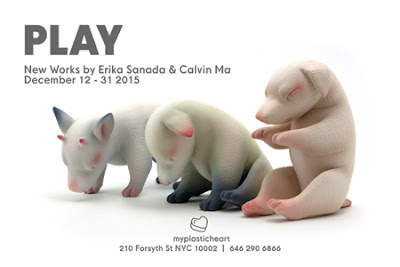 If I had a ton of money lying around I would totally start my own toy company and the first person I would contact about making a figure would be Erika Sanada.  Mind you I would have already purchased a herd of alpacas, a Harley, and an El Camino for my wife, but producing toys would happen soon after.  How Erika has not been approached about making the jump from ceramic to plastic baffles me, because her work would translate perfectly.  Who wouldn't want a little puppy with blank eyes and devil horns on their shelf?  I'll take one of those any day of the week.  Somebody give me some money and let's convince her how awesome of an idea it is.

You can see Erika's work in person beginning this Saturday at myplasticheart in New York.  She will have new work on display along with Calvin Ma, who has an interesting take on some very familiar characters.  If you still haven't gotten me anything for Christmas this would be a great way to remedy that. 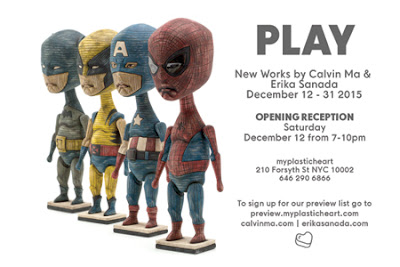