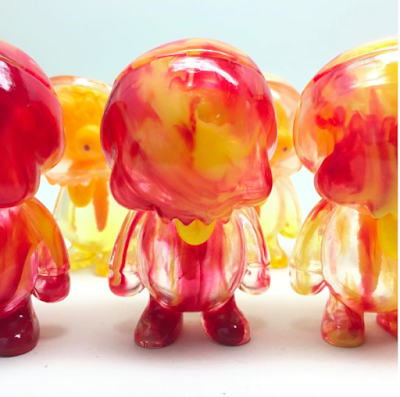 While framing a picture the other day my wife ended up tearing a chunk of skin off from just behind her fingernail.  She called me at work, asking me to bring some band aids home and in the meantime she had fashioned a make-shift bandage out of things she found in the house.  She had described there being a descent amount of blood, really could mean anything.  And then I came home to see exactly what she meant.  Her bundle of feminine products and masking tape had nearly soaked though, while the bathroom looked as though a struggle had ensued.  One kind of did, as she was searching for DIY first aid supplies one of our cats was trying to pick Q-tips out of the trash so he could eat them whole.  She had to wrestle a determined feline while her wound proceeded to leak like the latest Kanye West album.  Thankfully, she is made of tough German stock and watching a DVR'd episode of Project Runway was a great substitute for actual medical attention.

These new Young Gohsts from Ferg and Grody Shogun need a heavy dose of antibiotics as they're known as the "sepsis" edition.  But you may get lucky when you buy these a get one of the chase "on the mend" versions who is out of the woods and on the way back to his normal self.  These go on sale exclusively through http://www.playge.net on Monday April 18th at noon central time.
Posted by Chris at 7:35 AM