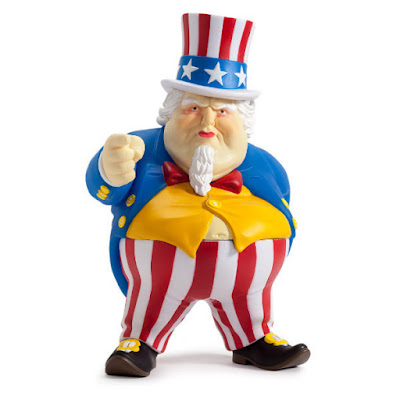 By the look of his waistline, it seems that the majority of my tax dollars have gone directly into the government's cheeseburger fund.  Leave it to Ron English to perfectly capture how most Americans must feel this time every year, as we send in those dreaded forms to the IRS.  I know taxes are a must, but they could make it hurt a little less.  Maybe have a fun animal mascot, or have that party patrol from Publisher's Clearing House deliver our refund checks.

Kidrobot wants to ease your pain this April 15th by releasing the very timely Uncle Scam figure, which heavily resembles my governor in New Jersey Chris Christie.  I can just picture this as his campaign poster if he actually had a chance at winning the nomination, which the rest of the US has no idea how lucky they are that would never happen.  Unless Trump wins the nomination and announces him as his running mate, which would undoubtedly be the coming of the antichrist and the end of days for mankind.  Kinda makes George Orwell's visions look like Dr. Seuss in comparison.  But fear not, because we have you covered on that front as well with this black and white version: 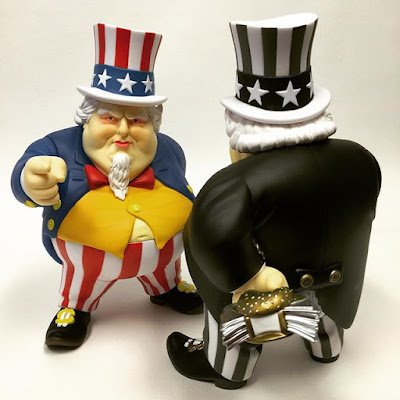 Is it a chase piece?  Is it a Kidrobot.com exclusive?  I don't know, but either way it's horrifying.  This pieces was brought to reality by the folks at Bigshot Toyworks.