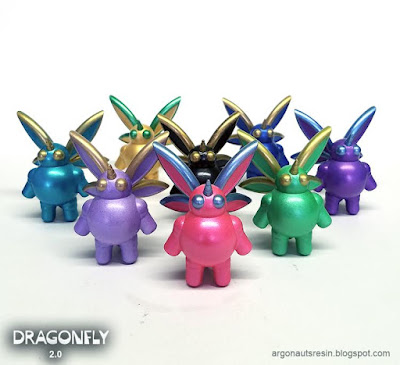 A few days ago I was sitting in the break room enjoying my lunch when a huge flying ant decided to pay me a visit.  He was flying around me trying to determine a good place to land when a coworker decided the need for coffee was much greater than my need to not be around them for 30 minutes.  She comes in and points out the presence of the insect and the next thing to happen I couldn't replicate if I have a thousand attempts to do so.  I put my sandwich down, raise one hand, and just like if we had practiced it for months the little dude landed on my finger (and the entire time I never broke eye contact with her.  My coworker not the ant).  I lower him to the table and proclaim that his name is Mitch and we are already the best of friends.  Then I let him outside and a bird probably ate him or something, but the point of the story is that I made a beautifully timed connection with a bug and it freaked out my coworker which was fun for me.

Argonaut Resins is all about trying to make you a bug whisperer with his Dragonfly 2.0 release.   Sequels can be hit or miss but these guys don't look like they'll let you down once you've invested in their back story.  These debut tonight (October 23) at 9pm eastern time through http://argonautresins.bigcartel.com.  There will be 25 different iterations in this first wave, which according to the metric system is the exact number it takes to make a swarm.