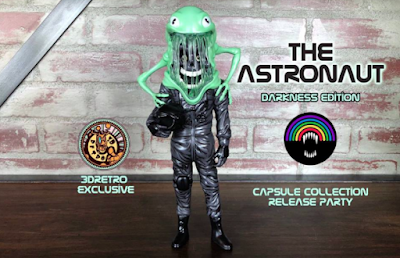 Alex Pardee used to live in Florida.  He finally came to his senses and got the hell out of there.  Now he lives in California and you can congratulate him on not getting eaten by dinosaurs when he hangs out at 3DRetro tomorrow night.  Of course he's not just there so you can shower him with praise and ask him how he managed to escape the state that ruins every election.  Nope, he's also got an exclusive version of his Toy Qube produced Astronaut figure and a bunch of other cool stuff so you can up your collectibles game.  The whole shindig goes down at 6pm so if you're in the Los Angeles area you should go and check it out and see a real live person that made it out of Florida's evil clutches.  It's like a sideshow except you won't feel so dirty about gawking once you leave.