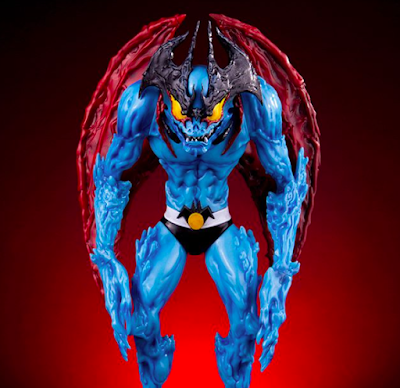 I could go for sprouting a set of bat wings, as long as they were retractable and I could still sit comfortably.  I figure if I managed to have bat wings in the first place the same magic that gave them to me could also make them able to disappear adequately.  And also get rid of my fear of heights, otherwise I'd only be able to fly about as high as a regulation basketball rim before getting the shakes.    These are the things my brain forces me to consider when I know I have to be up in five hours and actually trying to fall asleep makes doing so impossible.

Mike Sutfin's beyond detailed and uber popular take on Devilman is now in it's third incarnation with this Mondo exclusive blue variant.  Produced by the vinyl elves at Unbox Industries, there was little warning about this release, as it makes its debut today, Tuesday May 22nd, at noon central time. Ugh, you guys are killing me with all this cool stuff right before Five Points Fest.  Snag one and dream of the freedom that a pair of leathery wings would give you by visiting www.mondotees.com.