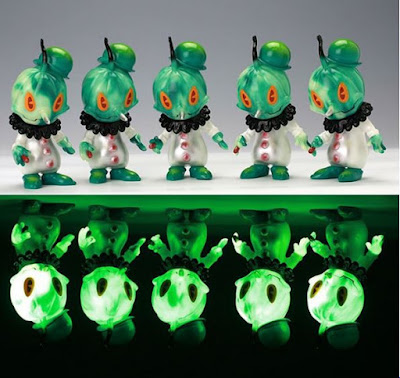 "Be still my heart, for thou beatest too fast at the sight of marbled vinyl!!!!!!"  That was taken from an unreleased Shakespearian play about a cobbler whose real dream was to one day produce multi colored vinyl toys to win over the nobleman's daughter, until she was tragically killed by a rogue gang of circus clowns and he spent the rest of his life becoming Batman and avenging her death.  I found it on The Bard's official Tumblr, which he somehow still updates much in the way Tupac still releases new music from beyond the grave.  Supposedly JJ Abrams has signed on to direct as he wants to focus on art pieces after Star Wars.  Can't learn this crap on TMZ.

Now that it's become painfully obvious I've taken too much of my medication this morning let us quickly get to the facts before I really lose it.  Brandt Peters' Stingy Jack is not only sporting a killer swirl of colors that I love in a completely non platonic way, but he also glows in the dark!!!!!!  It's almost too much goodness.  And they're very limited with only 50 available worldwide and only half of those in North America via Circus Posterus this Saturday, November 14th (Tomenosuke will take care of the rest of the earth.)  A few will also be available at Designer Con booth #519.