I Spent My Sunday at a Horror Convention 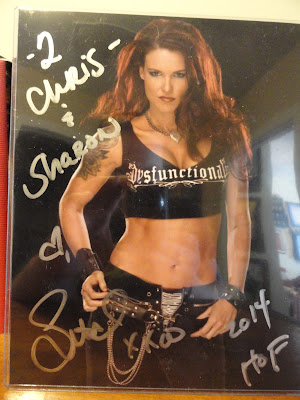 Horror conventions are a weird thing.  I like horror movies enough, but when you go to a convention you realize people live that as a life style.  There's an entire wardrobe that goes along with it, a required number of stickers that must cover the rear of your car, and an affinity for wet specimens that I'll never possess.  Sharon and I used to go to these more often, but they're pretty much the same thing every time and I always felt out of place because of my stellar credit score.  I just can't commit on that level to one genre of being, as I like to think I have a more diverse amount of interests than just watching fictional murders occur.  Wow, that sounds like a really weird thing to be into doesn't it?

We went this time because it had been a few years and because we wanted to meet former WWE Superstar Lita, who may or may not have been my biggest crush in my late teenage years.  Lest you think I was just looking to gawk at a celebrity my younger self found attractive, Sharon was a big fan of hers as well.  We got there and went to see her right away, got a signed picture, shook her hand (which was pretty soft for a professional wrestler.  She must have a killer moisturizing routine) and giggled internally like little school girls.  Having accomplished our sole mission it was now time to peruse the various booths and be persuaded to part with our hard earned money.  Spoiler alert: we were not persuaded to part with our hard earned money.

There were a few good set ups filled with new and vintage toys, but those were far outnumbered by the amount featuring bad taxidermy/the aforementioned wet specimens, and people who turn regular stuffed animals into weird zombie things.  Seriously, there is an entire underground industry where they make thrift store Care Bears into blood thirsty monsters.  A little paint, some Halloween prosthetics, and you've got the perfect gift for that hard to buy for member of the Manson family.

We ditched the convention pretty quickly and did the thrift circuit on the way home.  At one stop I got a bit distracted by a crow who was yapping at us and proceeded to lock the keys in the car.  In the ignition.  While it was running.  In my defense crows and ravens are my favorite birds and I've had some fun interactions with them as they are very curious about humans.  This one called a few of his buddies over and if I didn't know better would have sworn they were laughing at me as I was on the phone with AAA.  I'm sure they were just being supportive.

The only thing I bought, at a Goodwill directly after the car incident, was this plastic cat wall hanging thing, which I plan to paint in black metal style.  It was a $1 and called to me to be repurposed. 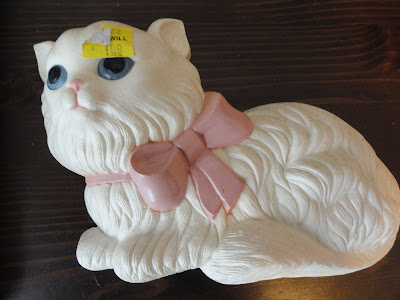 Ignore the price tag, cause this pretty kitty was on sale!


In that same store we also witnessed something I have never experienced while thrifting.  An announcement was made over the loud speaker that merely said "household goods" and people started heading towards the back of the building.  A moment later two employees wheeled out some metal racks loaded with newly priced merchandise.  They parked them right in the middle of the floor then quickly got out of the way.  They barely made it to safety as people swarmed from all sides, grabbing whatever they could as if they were gold plated.  You know that scene in the new Mad Max where Immortal Joe turns on the waterfall and people lose it trying to fill their containers?  It was just like that but less reasonable.  Sharon got pushed by an elderly woman into a baby who probably started crying because he missed out on the busted rice cooker and not from any injury he sustained.  Probably.

And thus our day was complete.  Ladies, be jealous that your man doesn't understand romantic dates the way I do.