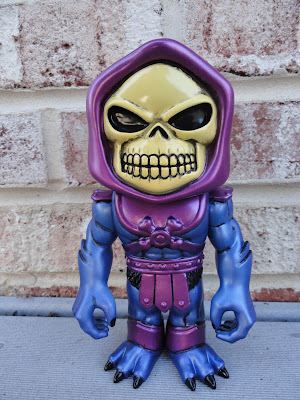 It's been a hot minute since I've done one of my patented world famous reviews so why not review a Hikari figure from Funko.  I've got a few Pops hanging around the homestead but I've never dabbled with their homages to Japanese vinyl, so when Benny from Tenacious Toys asked if I wanted to check one out my curiosity took over.  Behold the results of my investigative study featuring Skeletor.

First and foremost while the box advertises the figure as Japanese vinyl, the tag hanging from the toy makes it clear that it is inspired by the popular medium in its hand made production and paint application rather than being exactly the same.  The plastic definitely feels similar to my sofubi figures, but I'm far from a scholar on producing toys so I have no idea whether or not they're using the same stuff your favorite artists are. 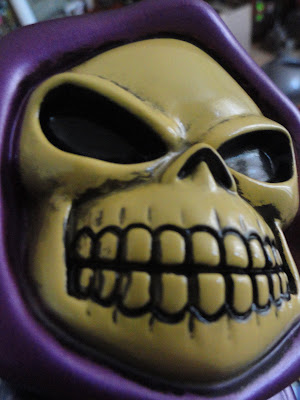 Product may contain up to 90% blood of thy enemies.


Now let's get to what's actually important:  is the toy cool or not.  As a collector I buy stuff based on how it looks and whether or not I like it, not how or where it's made.  You could make a toy out of recycled toilets as long as it looks awesome.  And I'll be honest with you, the Hikari style works better on some characters than others but I think this Skeletor is a win.  He translates well, possibly because he's monster-ish and fits with what I traditional think of as a Japanese toy.  And he looks tough enough to whoop He-Mans behind.  I mean, anyone with a fleshless skull for a head has got to be tough right?  You don't have to work that hard at it when you're bringing that to the table.

He features three point of articulation located at his arms and neck, so he can point at you in accusatory fashion: 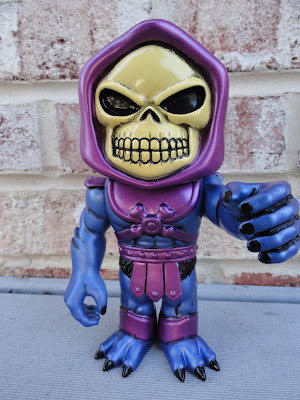 You both smelt it and dealt it. 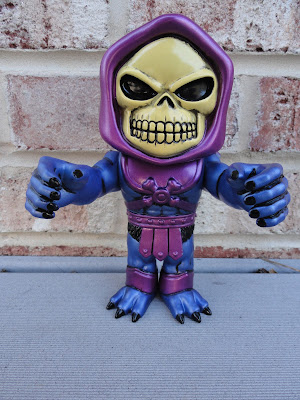 
Turn and look at you sideways when you say something dumb: 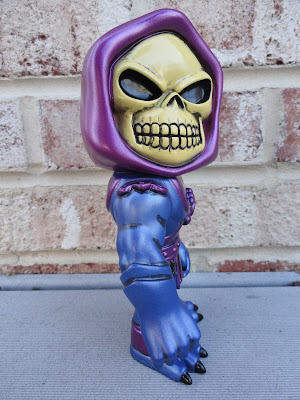 Your opinion was not thoroughly researched.


Wonder where the hell you're going when he tries to hug you: 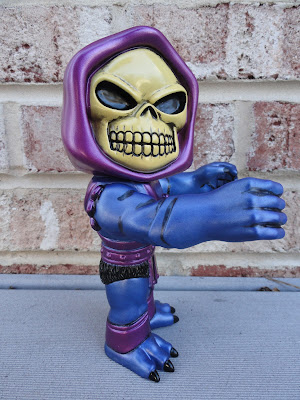 I said I'd be gentle.

But does he have that one feature that is most important in all Masters of the Universe figures; that one element that proves their authenticity beyond any shadow of doubt?  Does he have a fuzzy pair of man panties? 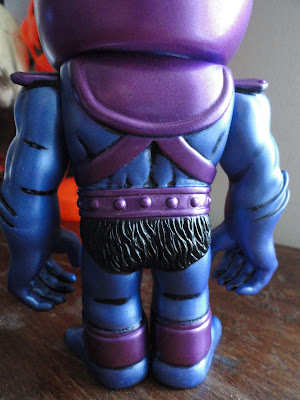 There you have it folks.  His butt is indeed covered with the finest of yak hair.  I could have just led with that and saved myself a whole bunch of typing.

In conclusion: I went into this not really knowing what to expect but came out of it with a greater appreciation for the product.  If I had hated it I would have told you because I have zero poker face, but it's honestly a cool figure at a price that won't make you have to choose between the collectibles you love and eating dinner for a week.  Again, not all of them are for me, but there are a few more I wouldn't kick out of bed if they found there way into my house.  I meant that exactly as it sounded.

Tenacious Toys now has this and a bunch of other older Hikari figures at very affordable prices that make them great for customizing as well.  You can find Skeletor, Astro Boy, Optimus Prime, Creature from The Black Lagoon and a ton of others to add to your collection.  Check out the entire line at this link.