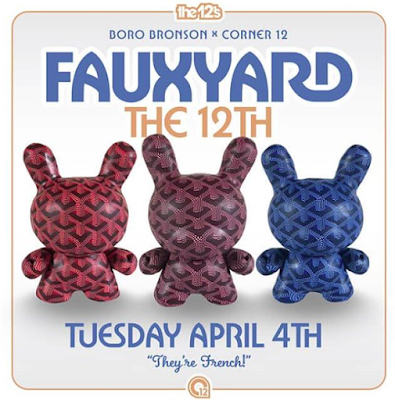 I took a ceramics class in high school for the same reason that I took three years of French: to meet girls.  Having seen the movie Ghost I knew that the way to a woman's heart is through a pottery wheel, and I was ready to sidle on up like the spectre of Patrick Swayze.  Much like my terrible French accent, ceramics was a total bust and I only made it of the class with a lopsided bowl and a really wonky looking mini toilet that I thought was so clever.  Spoiler alert: girls don't find wonky toilets endearing unless you also have a car that isn't a busted '84 Cadillac in beautiful primer gray that had as much a chance of starting the first time as I had of getting a phone number that wasn't a tow company's.

My experiences with clay are as described above, but Boro Bronson has mastered the art of polymer on a geometric level.   He's created an entire Dunny series for Corner 12 that are covered in these clay tiles that create a mind blowing pattern all over the figures.  I don't have the patience for such work, as my eyes would cross and I would quickly find something new to do.  Each comes packed in a wooden box and will go on sale today at 12:12pm pacific time at www.corner12.com. 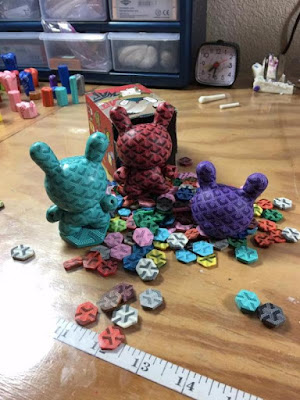