The Debut of James Groman's Brachiosaurus from Toy Art Gallery 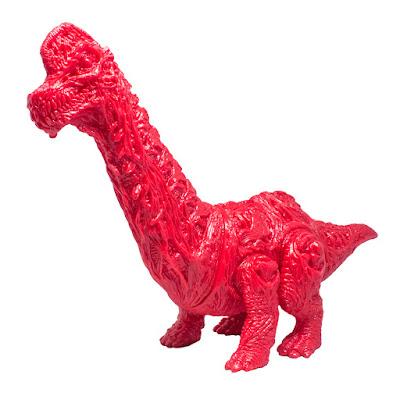 If zombie dinosaurs roamed the Earth, would they have still been around until we invented ways to kill them?  This is the pressing question of our times, or at least this very moment as we gaze upon the debut of this Brachiosaurus from James Groman x Toy Art Gallery.  Of course, it is possible that the zombie dinosaurs would have wiped us out before we had the chance to realize that you have to hit them in their pea sized brains for it to be effective.  Now I'm freaking out about zombies evolving to have tiny heads thus making them nearly immortal.  I need to start going to bed earlier.

Cast in a beautiful red vinyl, this eight inch tall lizard features five points of articulation, which would be just enough to not be able to do a damn thing about a giant meteor.  Available starting today (Friday, August 18) at noon pacific time, he can be yours for $125 only from www.toyartgallery.com.