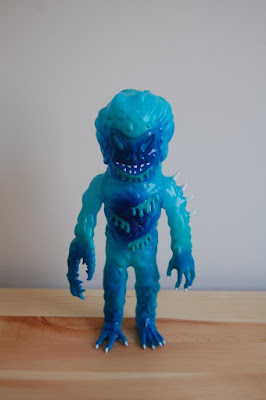 I was totally gonna write about this season of Game of Thrones but I don't want to be the dude that spoils it for those that haven't watched any episodes yet.  I'd be pretty heated if someone ruined it for me so I'll refrain from wondering too much about how slowly the army of the dead is moving in their attempt to get beyond the wall.  It's not like a kid who doesn't have the use of his legs totally got to where he was going and had time to rest up and spit prophesies.  I bet the undead formed a union and now they have to take regularly scheduled breaks.  Or maybe their bladders have all shriveled and they have to stop to pee constantly like that one time at New York Comic Con where I was trying to pass a kidney stone and I had to go every 10 minutes.  If you're ever peeing blood the most awesome thing you can do is not flush the toilet so the guy after you has something fun to talk about with his friends.

This Blue Draculobster from Michael Skattum (aka Draculazer) and Gums Productions totally reminds me of one of those White Walkers.  Except for the lobster claw and his utter disregard for clothing.  You can bring this ten inch vinyl toy home today for only $85 which includes shipping from Honk Kong, which is where giant lobster people live.  Snag one at http://www.michaelskattum.com before they sell out.