Even More myplasticheart for NYCC News 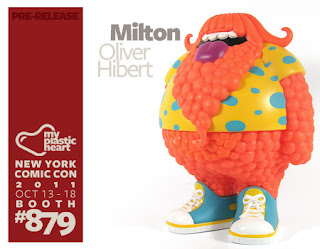 myplasticheart is not playing around. In fact, they are coming guns blazin' to New York Comic Con and here are a few more weapons they've added to an already impressive arsenal. That giant orange dude is named Milton and he was designed by Oliver Hibert and produced by adFunture. There are only 200 of him and he will be $65. In a weird way I kinda like this figure, not because it's my personal taste per se, but because he looks exactly like that guy Bruce Vilanch who used to always be on Hollywood Squares and whose facial proportions I could never quite wrap my head around.
If you couldn't care less about obsolete game shows, then how about the new DIY Teddy Troops? They come blind boxed in an array of colors and are only $7 each. That is the best deal you're gonna find all day. Unless you give a dollar to the guy dressed as Boba Fett who plays the Star Wars theme on an accordion that is always outside of the con. I couldn't even make that up. 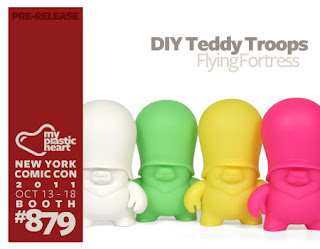