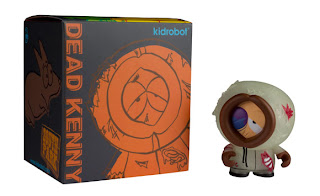 Kidrobot has done pretty well for themselves for this year's New York Comic Con. The theme of the year seems to be glow in the dark, which is ok if you don't keep them all in your bedroom and the nuclear glow they maintain doesn't keep you up at night and force you to develop a wicked coffee addiction. Isn't Kenny from South Park just adorable, looking a bit like he's been run over by a truck and then left out in the sun? While we've seen Kenny die many many times in his short life, have we ever seen him as a corpse/nightlight? Nope, so get one of the 1,000 made for only $11.95. 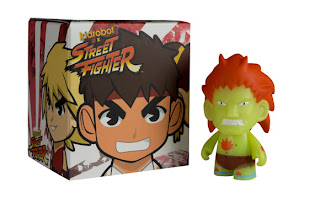 Need more things to glow in your house as if they were eager specimens on an episode of Law and Order? Keep your DNA to yourself and get a glowing Blanka! This beastly bro from the Street Fighter series is likewise limited to 1,000 pieces and will also cost $11.95. 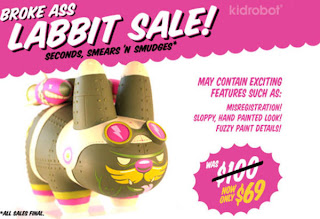 This is what I've been excited about ever since I first heard the faint whispers of it's existence. Kronk has taken Kozik's iconic labbit figure and turned it into a war machine. See the armor plating! Drool over the twin rockets hell bent on destruction! Love the....paint flaws? Whatchu tryin' to say Kidrobot? Ok, so it seems as if there were some quality control issues at the factory in China and there are some issues with the way the figure came out. So instead of melting them down and creating expensive paper weights, Kidrobot decided to put them on sale but for less than what they were originally going to be. Here's my thought on the matter. I don't think I've ever gotten a toy that I could say was 100% flawless. Mistakes happen at factories, accidents happen during shipment, and my cats are going to put teeth marks in it anyway. I applaud them for lowering the price and not just pretending nothing happened and I also applaud them for sticking by what is an amazing design. Am I gonna buy one? Yes, yes I am.
Posted by Chris at 6:09 AM