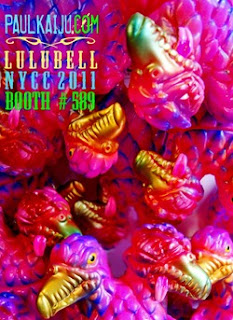 Paul Kaiju will not be making the trip to New York Comic Con this year, but his weird toys will be there representing for him. Above, you can see his Seagool figure, which is truly horrifying to me because I live near the boardwalk and seagulls are constantly attacking you for your food, your wallet, and your babies. Seriously, I saw these new parents feeding a seagull in front of their child who was enjoying the show from the comforts of his stroller. The next thing I know the food runs out and the bird jumps onto the kid and starts pecking at him like he's a giant funnel cake. Ok, that was kinda funny, but they poop on you too and no one wants to be forced into buying a "Jersey Shore" shirt because theirs is covered in bird excrement.
Thankfully, Paul Kaiju has also created figures based on elephants, which I'm sure no one finds to be annoying in real life. The Boss Carrion "Scanner" editions bring a level of creepiness all their own, but I really like them. Both releases will be featured at the Lulubell Toys booth, though I have no idea when these will be available or how much they will be. No matter what I'm not getting near one of those seagull characters. I don't trust 'em. 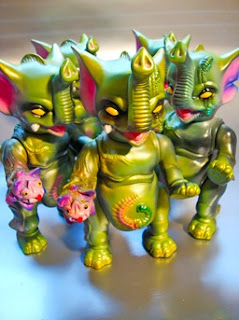