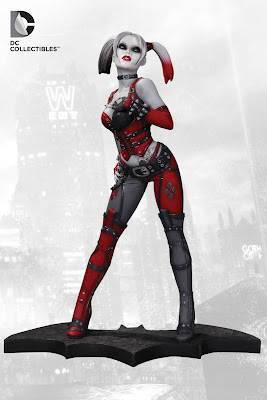 Everyone's favorite psychiatrist turned psychopath is getting the porcelain treatment in this new statue from DC Collectibles.  This is Ms. Harley Quinn as she appears in the Batman: Arkham City video game that I gave at minimum a few days worth of my life to.  Not that it wasn't worth it mind you, but I really wish that game developers would stop letting you know how much time you've spent playing one of their creations.  Rather than be happy when I've completed a game I'm usually depressed about all of the other stuff I could have been doing.  Like the fact that I haven't taken the trash out in a week and something smells as if it's regenerating and out for revenge.