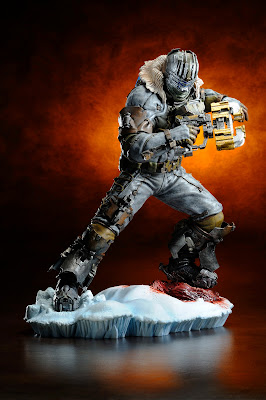 Don't you hate it when you're all dressed up in your fancy futuristic snow suit and you step in a big pile of dead thing?  It's enough to ruin a nice day out in winter's glory.  You're gonna have to leave that boot on the front porch so you don't track biological material all over the carpet then you're gonna forget about it and it will never be as nice as it once was after a few days.  Then you have to buy new boots, which you won't, because instead you'll try and wear your Chuck Taylors in an effort to save money and then your socks will get wet and you'll have to have three toes amputated when frostbite sets in.  The moral of the story is don't step in a pile of dead thing.

This is Isaac from Dead Space 3.  If you remember the previous 2 games you will know that he is some  kinda space dude who wakes up and is uber traumatized by the goings on aboard his ship.  Everybody is turning into things called Necromorphs and they jump out at you as soon as it's all quiet and you think you might be a tad bit safe.  In the second game there was a stretch of maybe ten minutes where nothing at all happens while you're searching this abandoned ship and it nearly gave me a panic attack.

Kotobukiya made this cool statue to immortalize the game's hero.  It even lights up so it can startle you in the middle of the night when you have to get up to pee.  You can get one of these when they're released in June for $139.99. 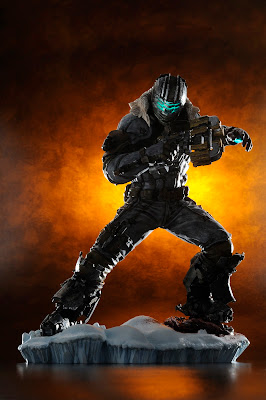