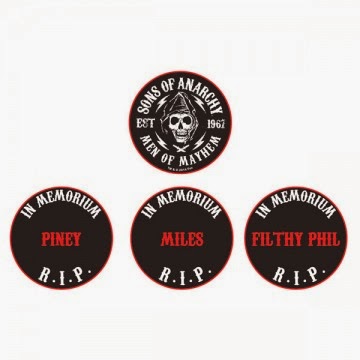 One of the things that makes Sons of Anarchy such a compelling show to watch is the fact that almost no one is safe from death's cold hand.  From one week to the next you won't know if your favorite character is gonna triumph or become another victim of the lifestyle they live.  The reaper patch has a way of imposing itself like a plague with just the slightest contact.

But let us not forget those that have paid the ultimate price in making our Tuesday nights so filled with drama.  Mezco has created three memorial coins to coincide with the actors that portrayed these deceased character's appearance at the Chiller Theatre Expo in New Jersey Apirl 25th-27th.  Only 200 sets were made and feature a white insert that would be perfect to have signed.  And since Katie Sagal will also be there, don't be alarmed if you see a lot of people roaming around with carving forks for her to sign.  Actually, you should probably be slightly alarmed and stay away from any sinks filled with old dish water just to be safe.