Back in Black Skullhead Dunny from Huck Gee 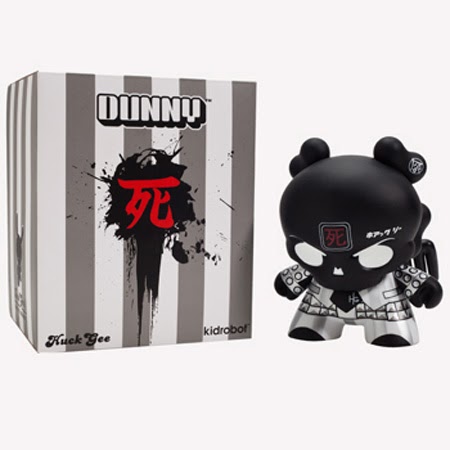 Isn't the term "skullhead" a bit redundant?  A skull can only be a head.  No one will confuse it with your skullfoot, or your skullbutt.  Skull need not be more specific than it already is.  I used to work at a clothing store and people would come in asking if we had shirts with "skullheads" on them and it would irritate me to no end.  Most of the irritation came from actually having to wait on people, but the skullhead thing bugged me too.

No matter my objection to the word, Kidrobot and Huck Gee have indeed titled this the Skullhead Dunny.  I am willing to overlook my linguistic concerns in the face of such a cool figure.  I have the white one they released a few years ago and almost had to beat a man to death to get it.  The story actually goes I had already bought it and someone tried to buy it off of me as we were leaving the store.  I just wanted it to sound much more dramatic than it actually was.

This 8 inch Dunny will retail at the very affordable price of $59.99 when it's released on March 20th.  For those keeping score at home this is the second 8 inch Dunny in a row from Huck.  That dude must know somebody.
Posted by Chris at 6:23 AM