Get A Second Shot at Jim Phillip's Screaming Hand from Kidrobot 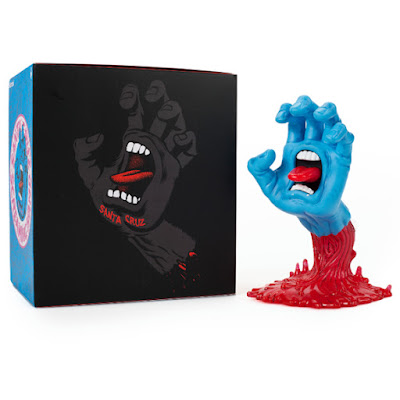 Have you ever seen those tumors that sprout teeth and hair and really freak my wife out?  Or those little stone babies that people carry around for years without even knowing it?  Those are nothing compared to sprouting a second mouth on your palm.  Think about it: those other two things are quiet. They may creep you out, they may cause you a bit of physical discomfort, but they won't scream all day long.  Or worse than screaming, what if it just wanted to bore you to death all day by telling you the same stupid stories, prefaced with "did I tell you about the time."  If you think you need to begin a story with the phrase "did I tell you about the time" then yeah, you already did.  I know someone who has told me the same mundane tales so many times I started finishing them for her every time she repeats one.  I can tell you just about anything you would ever need to know about her grown children, people that have died, what was on sale at Target in 1996, or her every career she ever had.  Contrary to my best efforts I have managed to store the most minute details in every dark corner of my brain and can rattle them off like some savant doing algebra problems.

Is there any wonder that someone severed this sucker just above the wrist?  Who knows where Jim Phillip's Screaming Hand began its life, but it's most certainly ending it sans the rest of the human form.  This iconic logo from Santa Cruz Skateboards was recreated in glorious vinyl by Kidrobot and released earlier this year, at which time it quickly sold out.  People were pissed that they couldn't get one so now you'll have a second chance on Thursday to welcome this into your life.  Pick one up tomorrow wherever you like to buy your toys or at www.kidrobot.com.
Posted by Chris at 4:22 AM