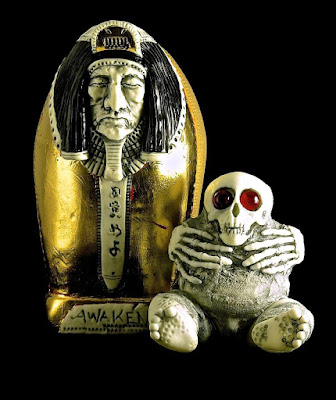 In case anyone was wondering, I have been a weirdo my entire life.  Case in point, when I was in kindergarten I wanted to be an archaeologist.  I was obsessed with ancient Egypt and my five year old self thought their could never be anything better than digging up old dead people while the editors of
National Geographic waited with baited breath for my newest discoveries.  I figured I'd probably have to get a bull whip and kill a few Nazis like Indian Jones, but those just seemed like bonuses to what was sure to be a lucrative career.  Then I realized that what it really involved was sitting in a hole with a makeup brush for days at a time and a distinct lack of adventure/hot dames to rescue at every turn.  Now the only dead bodies I hunt for are under the beds of hotels the wife and I stay at.  There's nothing to liven up a vacation like finding human remains.

Plaseebo is celebrating his 10th anniversary by doing what he does best; making crazy toys.  Over the next few months you can get your grubby little mitts on some one of a kind Mummy and Sarcophagus, starting with this set that releases tomorrow, Friday the 18th, at http://www.plaseebo.net/news/.  It'll look great next to any skulls you may or may not find in your flower beds.
Posted by Chris at 12:20 PM

Email ThisBlogThis!Share to TwitterShare to FacebookShare to Pinterest
Labels: Plaseebo