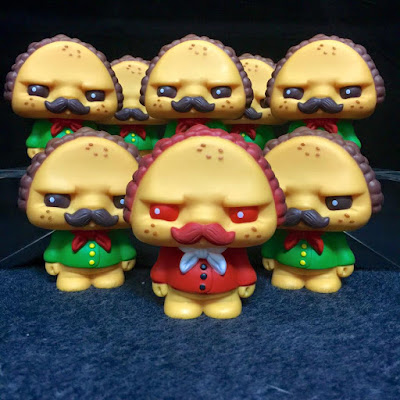 Whoever heard of taco Friday?  No one, that's who, because tacos were meant to be consumed on a day that starts with the letter "T".  I'm pretty sure it's in the Bill of Rights or one of those other important documents we all should read but don't.  Or maybe it's one of those weird blue laws we have in this country that no one actually enforces.  Like, don't make out with squirrels on a Sunday while wearing plaid, or being forbidden from trapping more than three weasels in a brown box during an eclipse.  I think they were to prevent witchcraft, or women from voting, or something like that.  I don't think anyone that's still alive even knows.

So, against all my arguments to the contrary, today is indeed taco Friday as Scott Tolleson and Pobber Toys are releasing Paco Taco.  He comes in two different flavors: regular and hot.  These are gonna be available at midnight SG time, which means wherever you happen to be you're gonna have to do the converting on that cause I am not feeling up to any time algebra today.  Taco up at www.pobber.com.