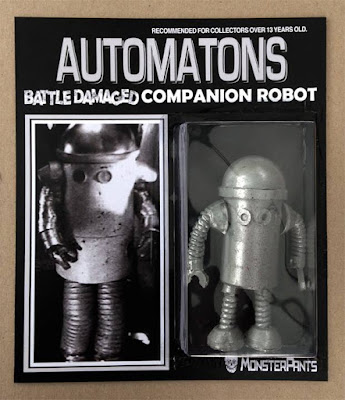 I can't say I've been in the market for a robot, though I still kinda want that little BB-8 guy, but if I was SERIOUSLY about to buy one, I'd want that sucker battle damaged.  Think about it, that sucker too, some heavy artillery to it so there's no way your house of demon cats is gonna take it out.  Unless that sucker is sooooooo battle damaged that even a Jawa wouldn't try to sell it to a group of moisture farming hillbillies.  Then you've got yourself an expensive lawn ornament.

Monsterpants released a film called Automatons a few years ago and now they're making available a resin version of the companion robot from the film.  Today at noon you could snag one of the 12 available pieces for just $40.  And you'll get a magnet for your fridge, a postcard so you can write to yo momma who misses you, and some trading cards that will probably not work in your competitive Pokemon league, but will make you table mates jealous.  These dudes are only available from  http://monsterpants.net/shop/.

Email ThisBlogThis!Share to TwitterShare to FacebookShare to Pinterest
Labels: Monsterpants