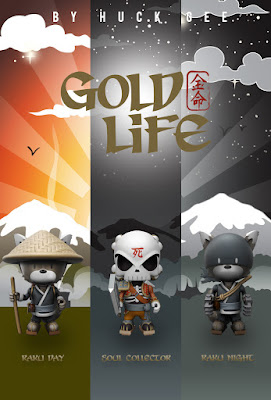 When I heard the phrase "Gold Life" I had images of living like a rap star with gold teeth and chains and maybe a 24k platted car that would one day get repossessed cause of that nightclub incident and the ensuing lawsuit that wiped out my fortune.  Of course I would make a pretty gangsta comeback by doing commercials for strip mall colleges that help you becomes a medical assistant and by being a clue on Jeopardy, all of which will rebuild my street cried and lead to my resurrection tour and my ability to catch up on my child support payments which the judge wouldn't lower even when times were tough.  Then soon after once I have regained my former glory I will OD on Sprite and cough syrup and then my hologram will go on tour and I'll keep releasing albums that were supposedly recorded before I died but I'm just low key dropping tracks from the grave because the peace from death has given me mad time to reflect and tighten my lyrical approach.  Not that I've thought this through or anything.

In reality The Gold Life is a a world created by Huck Gee that is way more feudal Japan than early '90's Compton.  The first three figures from this new series are being produced by Mighty Jaxx and are available for preorder right now from just about anywhere that sells designer toys.  There's three different figures and at only $25 each it would be a crime not to get them all.  Not like a felony or anything, but still a crime.