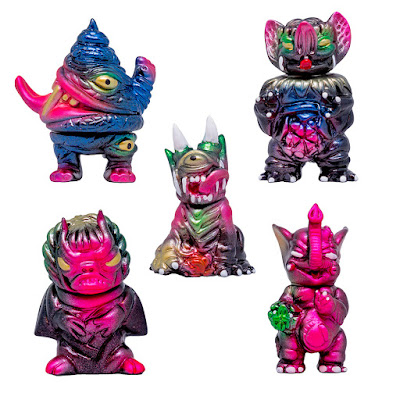 Look at these tiny Paul Kaijus!!!!!!!!  Aren't they just the sweetest little things?  This is known as the Dark Cosmos Edition of his popular gacha series and speaking of outer space I think it's high time the aliens went ahead and revealed themselves and invade our planet for better or worse.  Would we even bat an eyelash at this point if a UFO landed on the White House lawn, or would it just be a labeled as "fake news" and brushed aside like everything else is?  Or maybe they're already here and they're much crueler than we could have ever anticipated.  I already feel like we're gathered at the base of a space craft, waiting for the door to open and reveal whatever our fate will be.  Maybe I should skip the next Twilight Zone marathon.

Toy Art Gallery will have this set of critters available beginning tomorrow, Friday the 13th, at noon pacific time.  You better get them now before we are all forced to work in the salt mines on a far away planet that doesn't have WiFi.