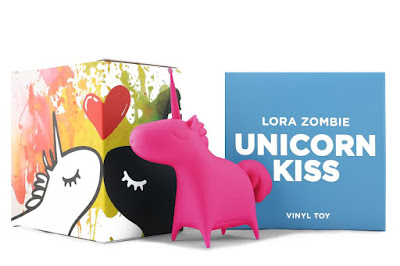 Sometimes I look at deer with their huge antlers and I wonder if they feel frustrated by having such things protrude from their skull.  I can't walk though the woods without getting hit in the face with a branch or having to turn abruptly to investigate a strange noise behind me, so imagine doing that with the equivalent of a chandelier on your head.  As cool as they look it just seems like they would bang into everything and things would constantly get stuck to them.  If unicorns were real that horn would probably get old just as fast.  They'd have to get each other to help remove all the stuff they skewered throughout the day.  This post has suddenly taken a dark turn.

If unicorns were real they would placate their horn issue by kissing, like, all the time.  Seriously, Lisa Frank never prepared you with her neon notebook covers for how much tongue action these things require.  They kiss all day, they kiss all night, they kiss during family functions and other times where you think they maybe should just give it a rest.  A little conversation never killed anybody, guys.

Lora Zombie and Eyes on Walls are pleased to release her first ever vinyl toy, appropriately titled Unicorn Kisses.  They come in four different colors, stand five inches tall, and are available right now for $25 each or as a set for $95 including a free sticker.  Get em all and let the whimsical love fest begin!  Whimsical Love Fest was the name of my first black metal band in high school, by the way. 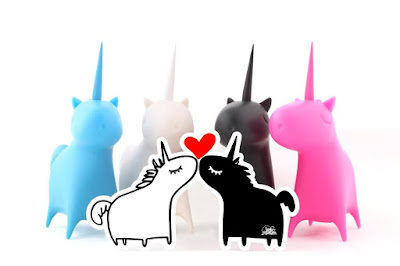