Patricio Oliver Wants You to Pick His Next Toy Design 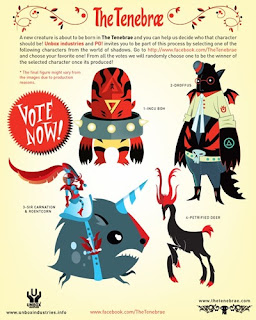 Recently, a lot of people have been interested in toy collector's opinions.  Most of the time I am more than willing to give mine whether it is solicited or not, so it's nice for a change to actually be asked.  Patricio Oliver and Unbox Industries want you to decide what the next figure they produce will be.  You have the choices pictured above and the figure with the most votes will join the crazy world of The Tenebrae.  You only have until March 28th to let your voice be heard and as an added incentive, one person will be randomly chosen to win one of the figures once its made.  It's better than voting for the president because you won't feel dumb afterwards when he screws the whole country up (not that that happens in EVERY election) plus you never win anything from politicians but higher taxes.  Go here and cast your vote now:  http://www.facebook.com/TheTenebrae